Don’t let the word “children” in The Children’s Museum of Indianapolis fool you into thinking this attraction is just for little kids. Here’s why you’ll want to visit, even if you’re a preteen, teenager, or full-fledged adult.

A special thanks to The Children’s Museum of Indianapolis for inviting my family to experience this attraction during our visit to Indianapolis.

Consistently ranked as one of the top things to do and see when you visit Indy, I couldn’t wait to explore The Children’s Museum of Indianapolis. But recalling past visits to other children’s museums across the country, my preteen wasn’t so sure.

Whether you’re in your 20s, 40s, or 80s, you probably remember how much middle school sucked. I don’t think any amount of time ever truly dulls a person’s memory of that awkward time straddling childhood and adulthood. Even the most confident kiddos struggle with the awkwardness that goes with no longer being a little kid and not yet being an adult (or even a high schooler).

If you’re “lucky” enough to be the parent of an adolescent, teen, and young adults (like me), you’ve likely learned that one of the most effective parenting strategies is crowd-sourcing. No, I don’t mean shipping them off to someone else to raise. (Although I’d be all for that some days!) Instead, I mean the best way to get your kids to listen to you is to have someone they admire tell them the same thing you’d say.

Leading up to our trip to Indianapolis, when Louise expressed concern about being too old to appreciate The Children’s Museum of Indianapolis, I told her that there were lots of “big kid” things to do. “They even have a monthly event that kids can’t come to because this place is so cool.” She wasn’t buying it.

But then my favorite Lyft driver ever saved the day. Deborah has lived in Indy for more than six decades. When we jumped in her spotless car our first day in Indianapolis, she happily shared her recommendations of what to do and see and where to eat in her hometown.

As soon as we stepped out of Deborah’s Toyota Camry, Louise turned to me and said, “I think The Children’s Museum might be fun after all.” 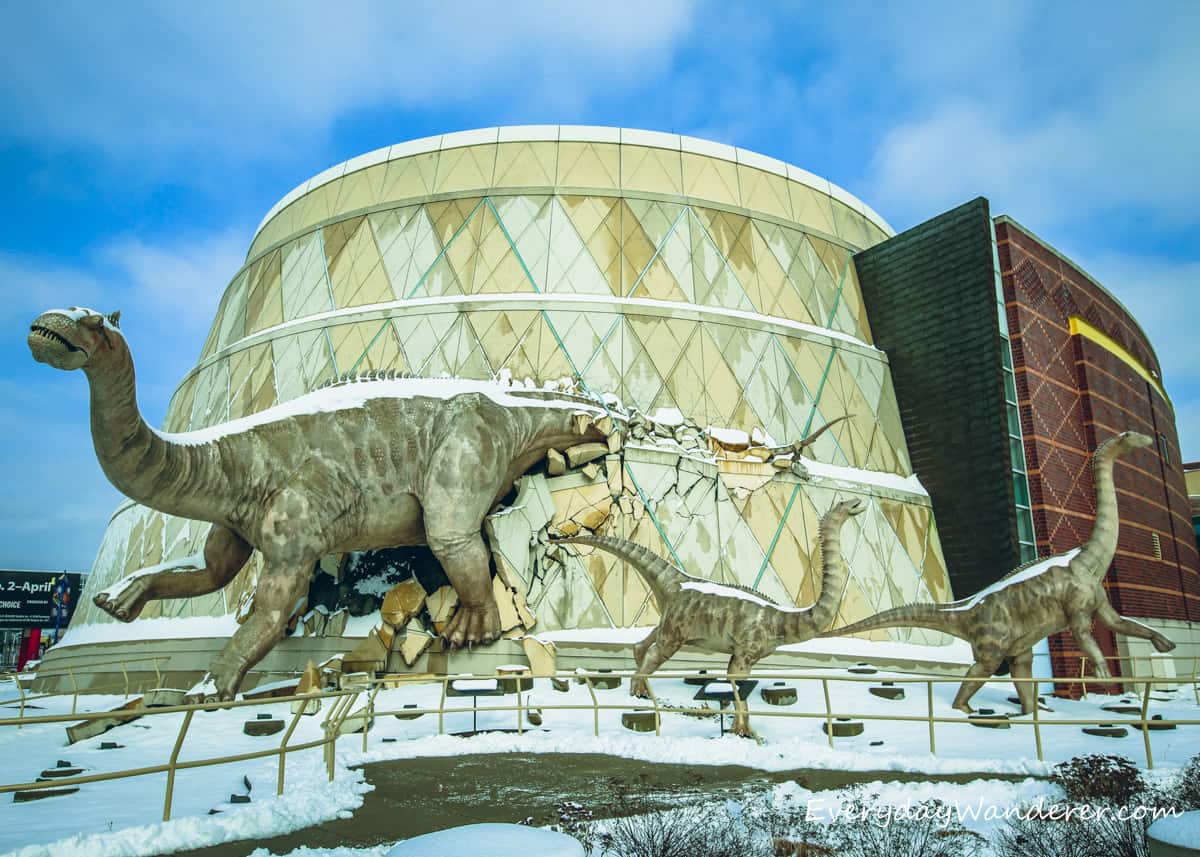 Here’s why The Children’s Museum of Indianapolis isn’t just for little kids. 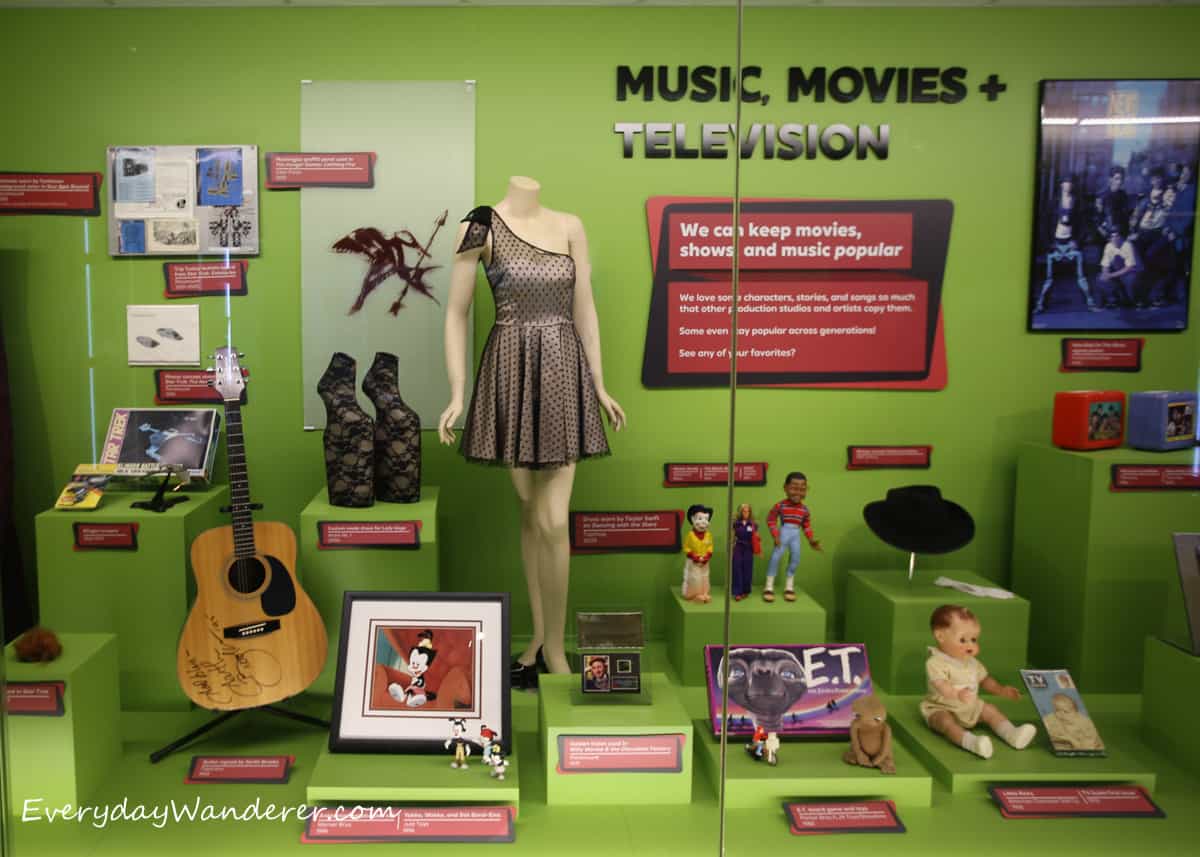 Music. Fashion. Film. From adolescents to centenarians, at least one of these topics will pique your interest when you visit the American Pop exhibit at The Children’s Museum of Indianapolis.

From vinyl to digital, witness how music players have changed over the years. Then test your music knowledge with an interactive experience to see if you know the original versus the cover. Country music fans won’t want to miss the guitar signed by Garth Brooks. If Taytay is your hero, you’ll want to see her fabulous, one shoulder dress from Dancing with the Stars, and Lady Gaga’s “monsters” will be delighted to see a pair of her black lace platform shoes. (Others will just wonder how in the heck she walked in them!) 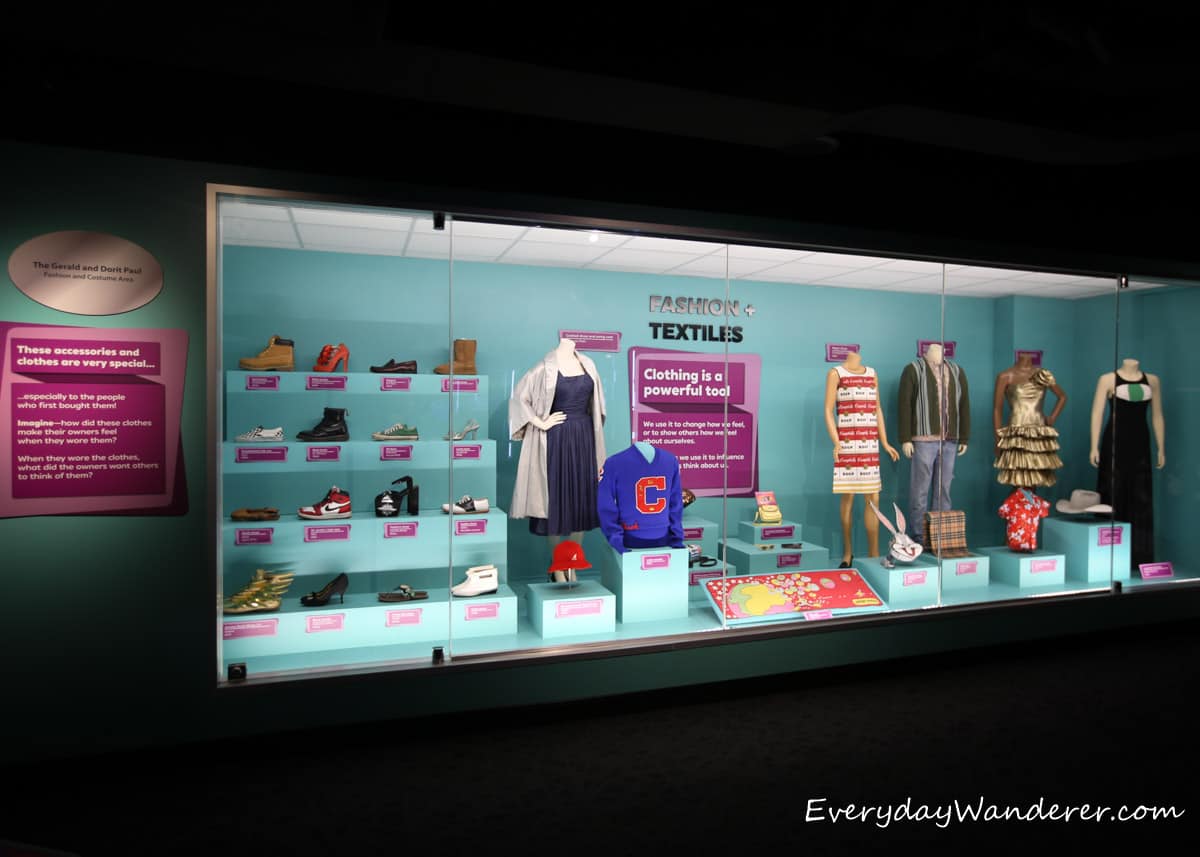 Speaking of shoes, explore fashion trends from footwear to fedoras. More than 200 cowboy boots are on display next to everything from Air Jordan high tops to Christian Louboutin heels. (Can you spot the telltale red soles?) Be inspired by fashion trends over the years and then sit down and channel your inner fashionista to dress a mannequin.

Whether you love movies or prefer acting in the smaller doses doled out on TV, the American Pop exhibit at The Children’s Museum of Indianapolis has you covered. Look for the golden ticket from Willy Wonka & the Chocolate Factory, “Mad Man” Don Draper’s tie, and enough Batman paraphernalia to impress even the biggest fan. Speaking of Batman, explore the comic books that inspired both movies and TV series, then design and digitally publish your own comic book.

Get Your Science Fix, from Dinosaurs to Astronauts

Although Louise declared herself “over dinosaurs,” she suddenly became interested in Sue, the largest Tyrannosaurus Rex ever found, on display at the Field Museum in Chicago when we visited a few months ago. Why the sudden change? Louise read that a female explorer and fossil collector found Sue the T-Rex, and she is inspired by strong, smart, successful women. (Fun fact:  Susan Hendrickson, the woman who discovered Sue the T-Rex, grew up in Muncie, Indiana.)

Bringing it back to The Children’s Museum of Indianapolis and the Dinosphere exhibit. Yes, Louise was beyond dressing up as a dinosaur and lying on a nest of eggs to keep them warm and protected. But she was intrigued by several other experiences. 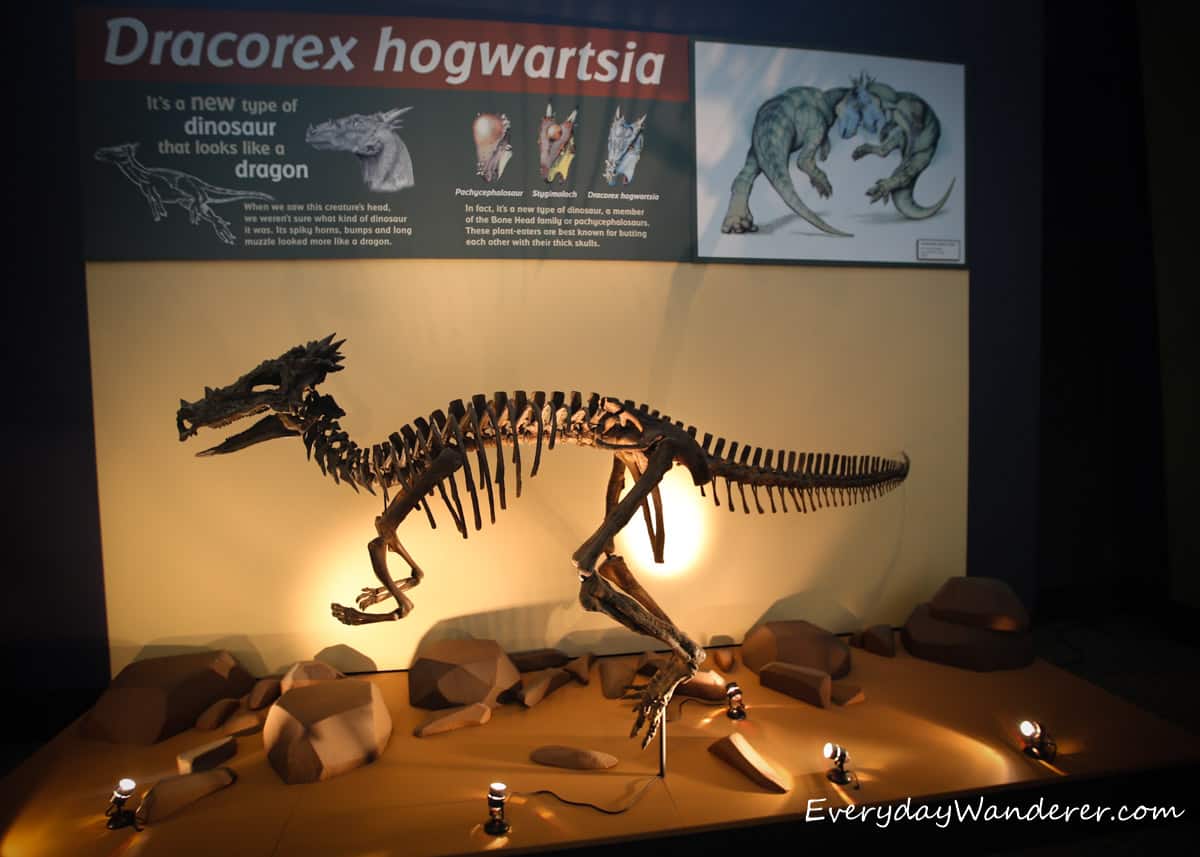 Uncovered in South Dakota, the Dracorex Hogwartsia is a newly discovered dragon-like dinosaur named after the Harry Potter series. Beyond its relatively recent discovery and fun name, we were fascinated by its size. Granted, it is believed to be a juvenile (like my “I’m not a little kid anymore” traveling companion), but that made it so much less intimidating than the gigantic T-Rex just around the corner.

Bucky the teenage T-Rex is on display under a lit dome that speeds through a whole day  on earth in just about an hour. Dawn was breaking as we first walked down the path between Bucky and other prehistoric creatures, and seeing them lit in the early morning light was an experience we’d never had at any other museum.

Around the corner, near the Paleo Prep Lab where real-life paleontologists excavate dinosaur fossils from recent digs, we looked closely at the mummified remains of Leonardo. Unlike the dinosaur skeletons typically on display, Leonardo gave us a glimpse at the skin, scales, and foot pads of a brachylophosaurus.

Moving From One End of Scientific Time to the Other 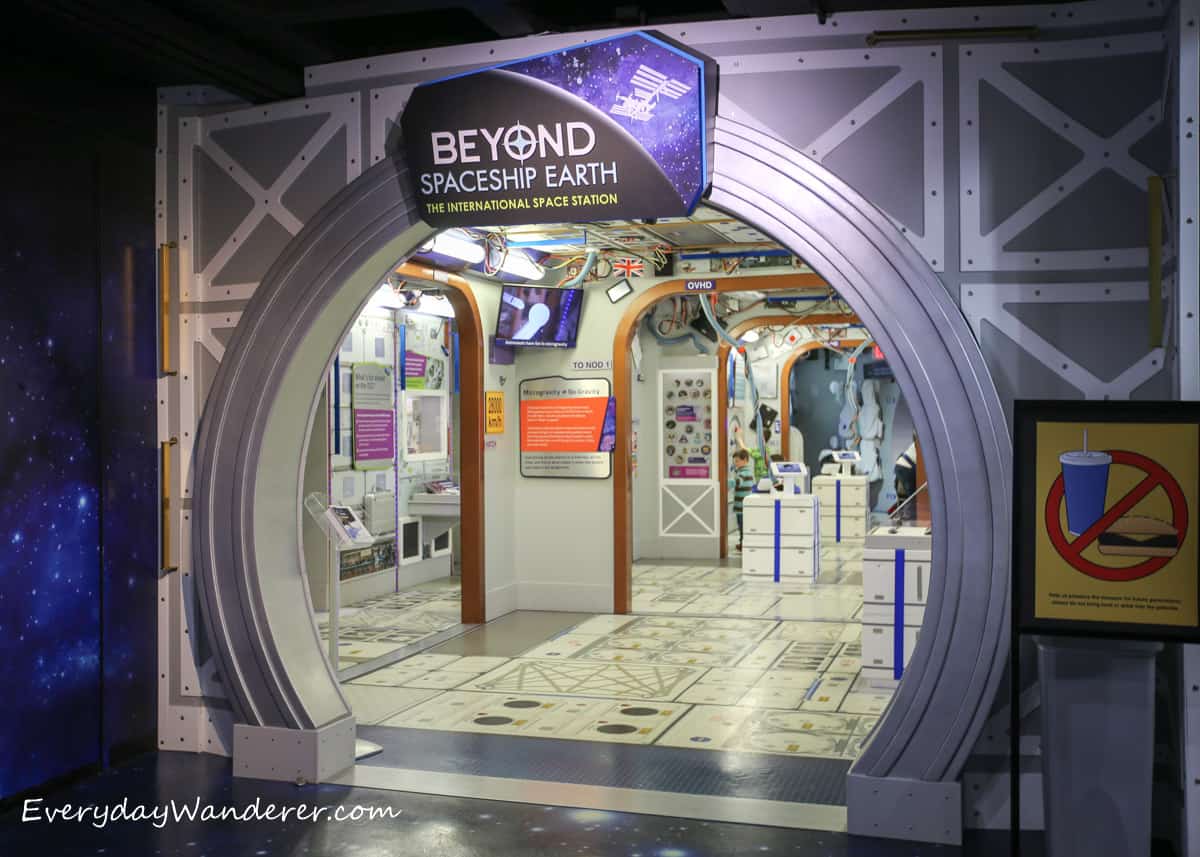 What’s the polar opposite of dinosaurs? Space! In the Beyond Spaceship Earth exhibit at The Children’s Museum of Indianapolis, visit the International Space Station while both feet remain firmly planted in Indiana.

Bringing experiences on par with Space Center Houston to the Hoosier State, this exhibit keeps things local by showcasing the astronauts from Indiana who have helped further our exploration beyond earth. David Wolf, the Indiana astronaut with four space missions under his belt bubble helmet, contributed many personal artifacts to this exhibit and helped shape the experience.

My pint-sized foodie was fascinated by what and how astronauts eat in space. The competitive dancer in her enjoyed watching an astronaut exercise in space before trying it herself. She was able to see how easy it is to lift a 10-pound weight in the low-gravity environment in space and understand how important resistance exercises are to keeping astronauts healthy away from earth.

Treasures of the Earth 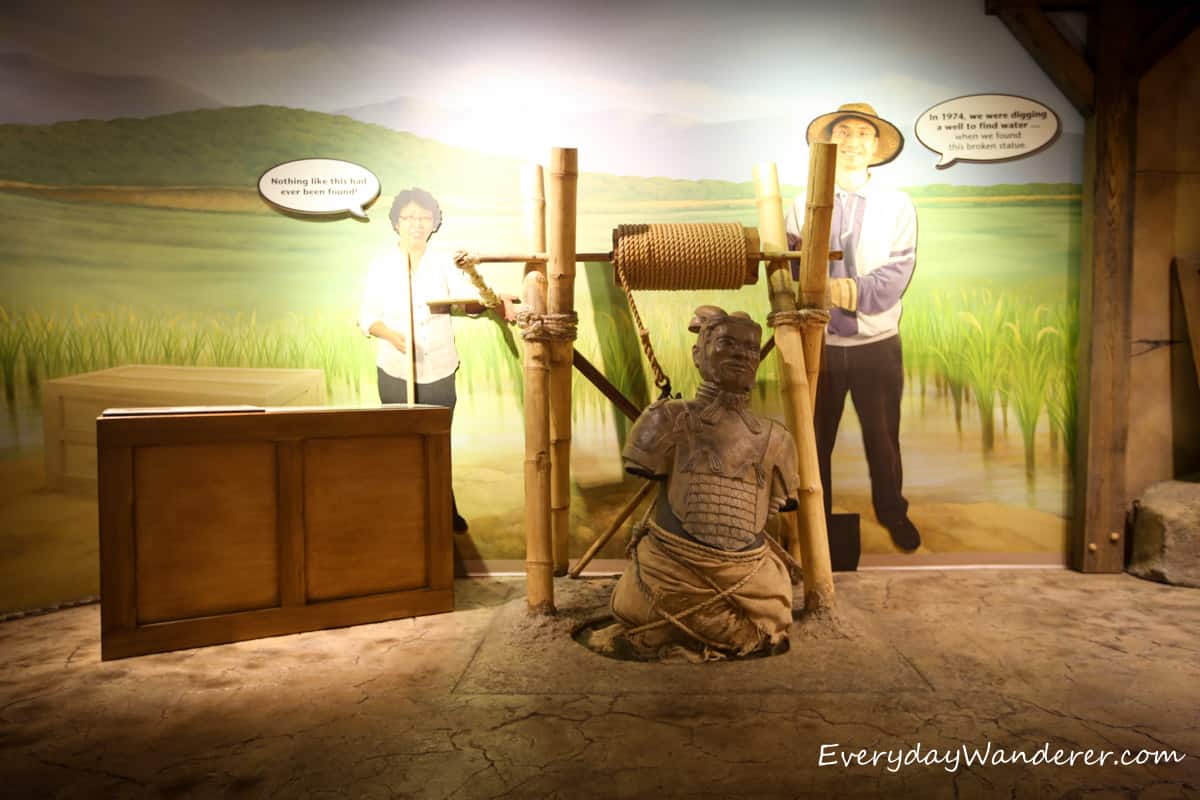 To me, science is all about uncovering mysteries, from digging up dinosaur bones to exploring the surface of Mars. The Treasures of Earth exhibit lets visitors uncover everything from an Egyptian pharaoh’s tomb to a shipwreck deep in the ocean. But what intrigued Louise most about this exhibit were the terra cotta warriors of China that her seventh-grade class had recently touched upon in school. 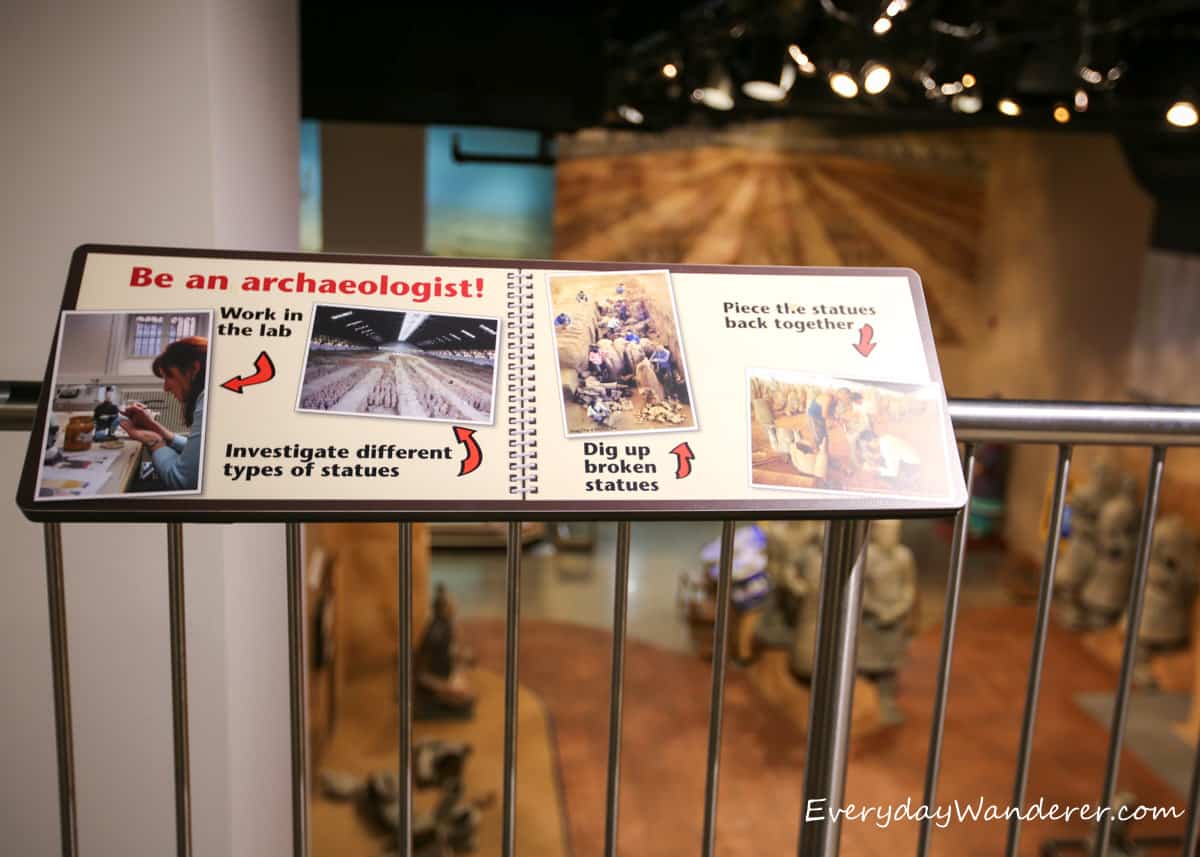 We were able to explore them in greater detail, and even reconstruct one ourselves, in this section of the Treasures of the Earth exhibit at The Children’s Museum of Indianapolis. 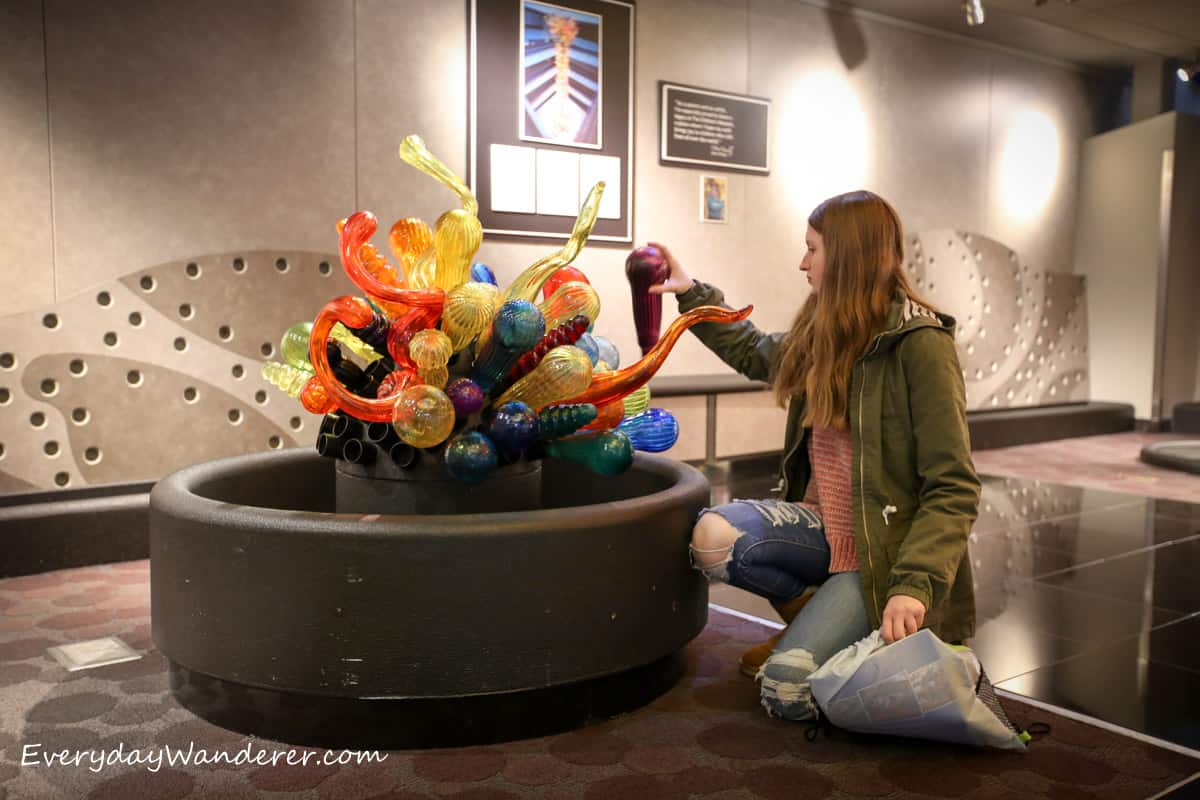 Although I never appreciated the art museums I was dragged through as a child by my mother, I do love Dale Chihuly’s work. The way he molds colorful glass pieces into larger-than-life structures fascinates me. As it turns out, the Children’s Museum of Indianapolis is home to the Washington native’s largest permanent installation of blown glass. With natural light pouring from a large skylight overhead, more than 1,600 pieces of vibrant blown glass rise 43 feet into the air in the Fireworks of Glass exhibit.

Better yet are the two experiences that wait for visitors just below the base of the glass tower. Despite my age, I’m like a little kid when it comes to wanting to gently touch the blown glass forms that Dale Chihuly fashions into his masterpieces. Although they’re plastic, Louise and I were able to channel our inner Chihuly and create our own masterpiece in the exhibit’s hands-on experience. Just as cool was jumping on a slowly rotating black wheel and looking skyward from beneath the glass tower to watch the colors move and fall like a kaleidoscope.

In case the amazing exhibits covered above aren’t enough, tickets to The Children’s Museum of Indianapolis also include the Sports Legends Experience. Indoor exhibits with year-round access include The World of Sport, where visitors of all ages can play the role of athlete, announcer, and sportscaster. And while Indianapolis is known for its speedway and 2007 Super Bowl-winning Indianapolis Colts, this experience goes beyond auto racing and football. Shoot for an Olympic 10 on the floor beam, row together as a crew, block the puck on the hockey rink, and more. But because you are in Indy, don’t overlook the motorsports garage, where you can compete in a pit stop challenge and see an Indy 500 race car.

Although the Sports Legends Experience offers both indoor and outdoor activities, the outdoor area is closed from November to March. Therefore, we missed the opportunity to experience it during our February visit. If you plan to visit The Children’s Museum of Indianapolis during the seven months of the year that the outdoor activities are open, be sure to check out these five game-winning strategies for planning your visit to the Sports Legends Experience.

To Visit the The Children’s Museum of Indianapolis

Hours:  10:00 am to 5:00 pm daily with extended hours in spring and summer. The Children’s Museum of Indianapolis is closed on Mondays during winter.

Cost:  Ticket prices are lower during the winter months when several outdoor exhibits are closed. Year-round discounts are offered for children and seniors, and children under two are admitted at no charge. Save up 25% by purchasing your tickets online in advance of your visit.

For the latest information, including temporary exhibits, special events, and free admission days, visit The Children’s Museum of Indianapolis’s website.

Where to Stay:  Find hotels near The Children’s Museum of Indianapolis and other places to stay in Indianapolis

Have You Visited the Children’s Museum of Indianapolis? 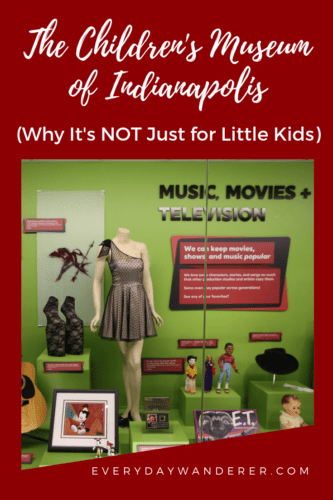 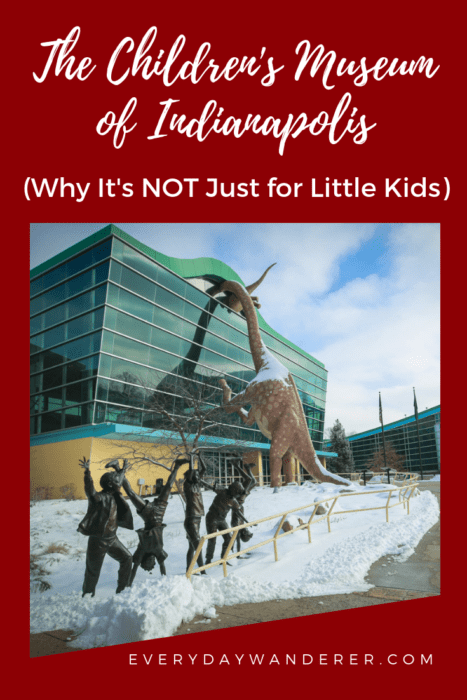 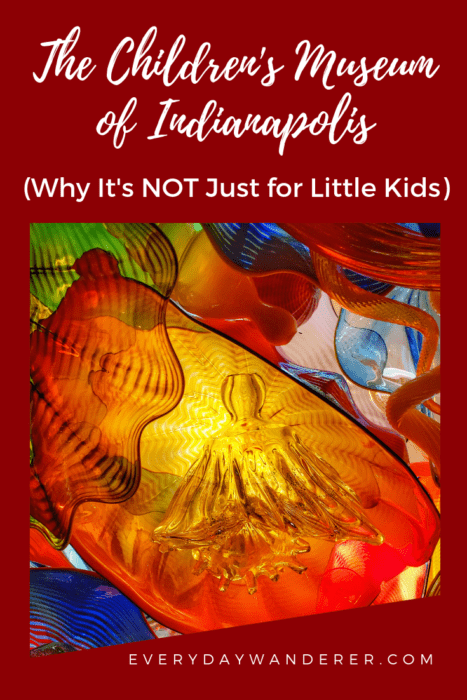