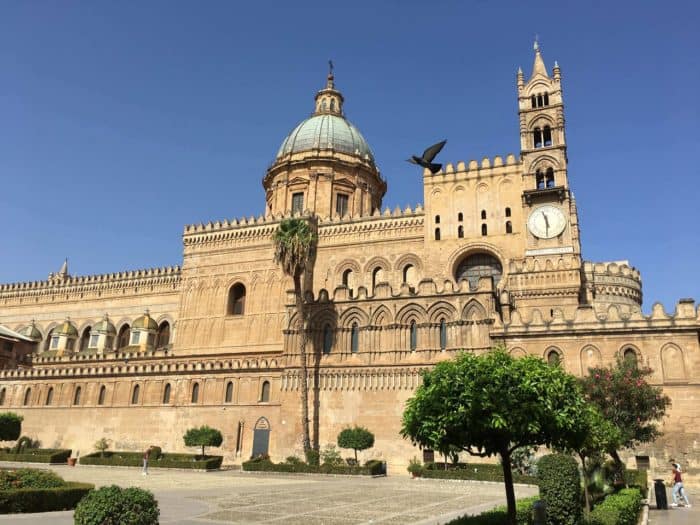 After winding her way through Southern Italy, Talek and her travel partners drove their car onto a ferry and crossed the sea to the Island of Sicily. After exploring the streets, eating the most amazing food, and touring the impressive Palermo Cathedral, she jotted off this postcard.

Representative of the history of the city it was named after, Palermo’s glorious cathedral is designed in diverse architectural styles; Norman, Gothic, Arabic, Byzantine and Anglo.

The present structure was built in 1185 on what was once a mosque then underwent extensive renovations throughout the centuries. Today the cathedral is a who’s-who resting place for European royalty. 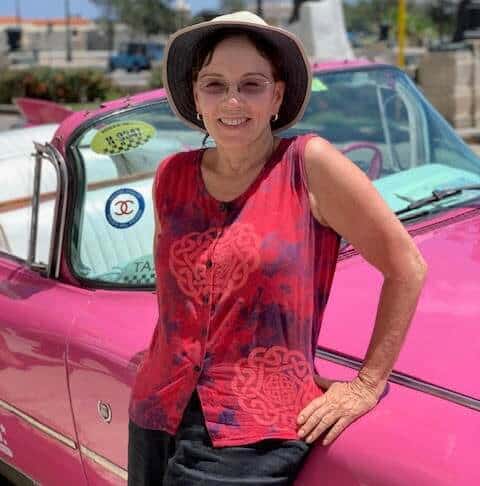 Talek Nantes is a New York City-based author, digital content creator, and founder of the blog, Travels with Talek. She is a passionate travel enthusiast and enjoys sharing her travel experiences with others, like her road trip through southern Italy.  Talek’s personal and professional background have led her to travel to over 100 countries and her work has appeared in several travel publications.

For those of us who haven’t visited yet, give us an overview of Palermo, Sicily

Palermo is the capital of the Italian island of Sicily. It sits at the tip of the Italian peninsula and has been at the crossroads of numerous civilizations throughout its long history. The city of Palermo is over 2,700 years old, and it has been home to Phoenicians, Greeks, Romans, Arabs, Normans, and more. All of the cultures that have enriched Palermo over the years are still evident in its architecture, cuisine
and culture.

Pro Tip:  Headed to Europe for the first time? Here’s everything you need to know before you go.

What’s the best way to get to Palermo?

Palermo can be reached many different ways:  planes, trains, ferry, and automobile.  There are regular flights into Palermo, rail service, and ferries regularly arrive in Palermo’s ancient port from cities all over Europe. But one of the most common ways to enter Sicily is by car.

If you choose to cross the sea from the Italian mainland to the Island of Sicily with your car, you’ll have to take a ferry. In the town of Villa San Giovanni, cars are driven onto ferries and depart every 20 minutes shuttling passengers, vehicles, and other cargo across the strait to the town of Messina. From Messina, it’s about a three-hour drive along the Northern Sicilian coast to Palermo.

What was your favorite moment in Palermo?

There were too many favorite moments to choose just one, but how about I limit my list to three?

First, there was the utter delight at how good the food was in a little square outside the Cathedral of Palermo. There were a couple of little restaurants lined up outside some arches in a plaza that easily could have been 2000 years old. We thought were going to get a simple pasta dish, but what we received was one of the best dishes I’ve ever tasted!

Another favorite moment in Palermo was discovering a street fair right outside of our hotel where they were having a gelato festival.

And last, but certainly not least, there was seeing the opulence and magnificence of the Palermo Cathedral for the first time.

You had me at gelato! How did you travel around Palermo?

Since we were on road trip through Southern Italy, we had a car. It is certainly the most convenient way to travel in Sicily. However, parking can be an issue in some of the more crowded areas, and you may want to consider a parking garage when one is available.

A note of caution to those renting a car in Italy:  make sure you get a smaller model. The streets in Palermo are very narrow in some parts of town, and a big car won’t easily fit down those narrow alleys.

One of the best parts of travel is experiencing the local flavors. What was your favorite meal in Palermo?

My favorite meal was the one mentioned above in the Palermo Cathedral Plaza. Other notable mentions include a meal at Casa del Brodo dal Dottore (The Doctor’s Broth House), a restaurant in central Palermo specializing in Sicilian country cooking.

It is almost impossible to have a bad meal in Palermo.  Food is such an integral part of the culture that to serve a bad meal is almost shameful. Needless to say, being an island, the seafood in Palermo is fresh, innovatively-prepared, and plentiful.

Palermo is one of the world’s great street food cities. You’ll find little street food vendor enclaves on many streets, just pull up a chair and sample the many Sicilian street food specialties! One can’t miss delectable delight is the arancini, little fried rice balls with different fillings. You won’t be able to get enough of them!

Did anyone travel to Palermo with you?

I happened to travel to Palermo with my husband and two friends, but Palermo is a city perfect for anyone. It can be a family town, a romantic getaway for couples, a solo travelers paradise, or a great tour for a small group.

Did you learn any local expressions in Palermo?

Here is one we learned by accident. We were driving around an area and trying to follow the signs, but we kept going around in circles. Finally, we asked a policeman how to get to where we were going. He told us to ignore the street sign, although it would be a piccolo infraccione (small infraction) – he put his index finger and thumb together and squinted to indicate how small the infraction would be – we would get to our destination.

We were surprised that a traffic cop was telling us to break the law and go against the sign. We debated asking him why they don’t just change the sign but (wisely) decided against it. For the rest of the trip we kept saying piccolo infraccione to each other and squinting.

That’s hilarious! Besides helpful traffic cops, what other sights can’t be missed when visiting Palermo?

You cannot miss the Palermo Cathedral, Norman Palace, the Opera, and the port with its lively restaurants. The city also has tons of museums. However, we unfortunately didn’t have time to visit any of them.

Perhaps the most interesting part of the city is its numerous markets. There are four major markets in Palermo:  Capo, Ballaro, Vucciria, and Borgo Vecchio. Additionally, the city boasts many more, smaller neighborhood markets. It is in these markets where you see the daily life of Palermo, how the people shop for their daily needs, and the different types of produce (some of which you won’t recognize). There are also little food stands at the markets where you can have a quick snack.

What was the weather like when you visited Palermo?

What activity or attraction did you enjoy most in Palermo?

What we enjoyed the most was simply wandering the Palermo streets. The architecture is fascinating because it is a combination of all the cultures that have passed through the city:  Norman, Arab, Byzantine, Greek, and Roman. You see traces of each in the city’s buildings.

Palermo also has a large number of former palaces, many of which are abandoned. It is interesting to look at them and imagine what they were like at their past splendor.

Street festivals were also fun. We enjoyed the food at these fests. Once we were lucky enough to see a religious procession snake through the streets. The people carried religious idols and sang.

What’s the one thing travelers can’t forget to pack when they visit Palermo?

Travelers should pack the usual:  sunscreen, comfortable shoes, chargers, you know the drill! But one thing you must bring with you is a hearty appetite! In a place like Palermo, Sicily, your appetite will be the door to understanding a beautiful culture through its cuisine.

Find more inspiration for your trip to Italy via these resources: 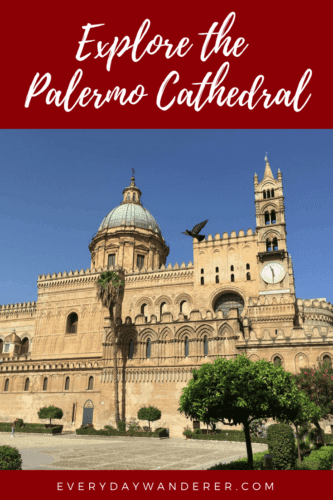 1 thought on “Everyday Postcard from the Palermo Cathedral in Sicily, Italy”