With the flip of a switch on Thanksgiving evening, the Seville-inspired Country Club Plaza in Kansas City, Missouri, is suddenly illuminated with hundreds of thousands of colorful lights that burn brightly each night through mid January. These publicly accessible spots are the best places to photograph the Country Club Plaza lights.

Across the nation, Thanksgiving is often the official start of the Christmas season. After enjoying a hearty feast of savory turkey, scrumptious sides, and pumpkin pie, many Americans will trim the Christmas tree and otherwise transition from one family-and-friends-filled holiday to the next.

In the middle of America, tens of thousands of Kansas Citians push back from their Thanksgiving tables and head to the Country Club Plaza to enjoy one of Kansas City’s oldest traditions. With the streets closed to traffic, pedestrians fill 15 blocks of the upscale, Seville-inspired outdoor shopping district to kick off Christmas with the Country Club Plaza Lighting Ceremony.

With a backdrop of live holiday music and ornate horse-drawn carriages reminiscent of a Disney movie, a special guest and a child helper chosen randomly from the crowd flip the switch at precisely 6:54 pm on Thanksgiving evening, transforming the dark (often cold and sometimes dreary) night into a spectacular scene full of bright bulbs and holiday cheer.

This colorful tradition began in 1925 with a single strand of 16 rainbow-colored lights strung above a doorway. Today when you visit the Country Club Plaza between Thanksgiving and mid January, you’ll see more than 80 miles of lights with 280,000 multi-colored bulbs outlining every window and tower.

Here are the 10 best places to photograph the Country Club Plaza lights in Kansas City when you visit daily from 5:00 pm to 3:00 am between Thanksgiving evening and mid January.

1 – From the Rooftop of the Giralda Parking Garage

This location allows you to get up close and personal with the beautiful Giralda Tower, illuminated in soft white lights. This Kansas City landmark is a half-scale replica of the original 12th-century Giralda Tower in Seville, Spain.

2 – By the Fountain of Bacchus in Chandler Court

(Or, as the locals say, the fountain outside of The Cheesecake Factory. It’s located at  4701 Wyandotte)

In addition to being known as the Barbeque Capital of the World, Kansas City is also called the City of Fountains. In fact, the red, white, and blue triband flag of the city features a fountain shooting water in the shape of a heart at its center. So this recommendation for the best place to photograph the Country Club Plaza lights is one of several that features a fountain.

Installed and dedicated in 1967, this five-ton fountain was originally the centerpiece of the Moreton Estate in Warwickshire, England, before it immigrated to Kansas City.

Pro Tip:  Explore more of the Country Club Plaza and her amazing fountains with this interactive scavenger hunt.

3 – At the Mermaid Fountain

With two alabaster mermaids blowing water out of conch shells, the Mermaid Fountain located at 4747 Broadway Boulevard is a great place to photograph the Country Club Plaza lights. Between the twin, 300-year-old Italian mermaids is a small bronze sculpture of a child kneeling in prayer. As you photograph the Country Club Plaza lights from this spot, be sure to follow tradition and do as directed on the small plaque: toss in a coin and say a prayer for the children at Mercy Hospital.

4 – At the Pomona Fountain

Just a few steps south of the Mermaid Fountain, the Pomona Fountain sits at the intersection of Ward Parkway and Broadway Boulevard. With both hands full of plump grapes, it should be no surprise that the life-size bronze beauty featured in this fountain is the Roman goddess of vineyards and orchards. As she gazes across Ward Parkway toward Brush Creek, she provides a creative place to photograph the Country Club Plaza lights.

5 – From the South Bank of Brush Creek

Installed at the intersection of Ward Parkway and Wornall Road, just across from the Intercontinental Kansas City at the Plaza, is a bronze, larger-than-life statue of the Churchills. World leaders Winston Churchill and Missouri-farm-boy-turned-president Harry Truman worked closely to bring an end to World War II and remained close friends after leaving office.

Fun Fact:  Although this sculpture was specially commissioned for this location, a small-scale version of Married Love is on display at the National Churchill Museum in Fulton, Missouri, where Churchill delivered his famed “Iron Curtain” speech at Westminster College in 1946.

7 – From One of the Bridges Spanning Brush Creek

As you walk back toward the Country Club Plaza lights across one of the two bridges spanning Brush Creek, you’ll see several prime photo opportunities. Because I love the ornate lanterns on the Wornall Road Bridge, and because it takes me to the heart of the Country Club Plaza, it’s my preferred return path.

8 – At the Neptune Fountain

Installed in 1953, this cherished Country Club Plaza fountain was pulled from the top of a train car full of scrap metal and purchased based on its 8,000-pound weight. With a trident in his right hand and clad in a cape and loincloth, the ripped Roman god drives his trio of water-spewing steeds through the shallow waters of his namesake fountain toward the Shake Shack just across 47th Street. After all, even Roman gods gotta eat.

9 – From the Center of the Street

I’m not suggesting that you walk out into traffic, set up your tripod, and expect the world to revolve around you. However, several of the roads on the Country Club Plaza have medians where it is possible to get a unique perspective on the lights without putting yourself, your camera equipment, or anyone else in harm’s way.

Just above the Neptune Fountain and Made in KC Marketplace, with a bird’s-eye view of the urban island that contains the Fogo de Chão Brazilian Steakhouse, the rooftop of the Balcony Parking Garage at 4619 Broadway Blvd. is another fantastic place to photograph the Country Club Plaza lights.

Peer over the edge facing Wornall Road for a view of the Fogo de Chão tower with the Giralda Tower and Commerce Bank Building in the background. Or look west across 47th Street toward The Classic Cup Cafe for an entirely different view.

The other thing I love about this spot is the opportunity it provides to frame the lights in a unique way using the intricate brickwork of the parking structure.

Tips for Photographing the Plaza Lights

Hours:  The Country Club Plaza lights are on between 5:00 pm and 3:00 am daily from Thanksgiving evening through mid January.

Have You Visited the Country Club Plaza Lights?

What was your favorite spot to take in the colorful Country Club Plaza lights? Do you have any other tips or advice to pass along? Share your thoughts in the comments section below.

More Information and Inspiration for a Visit to Kansas City 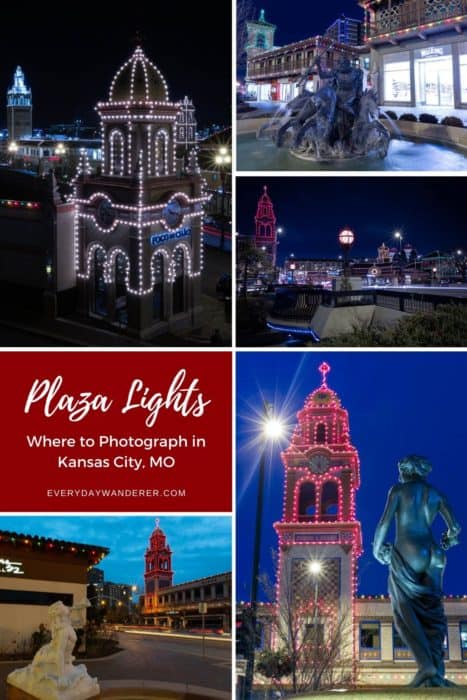 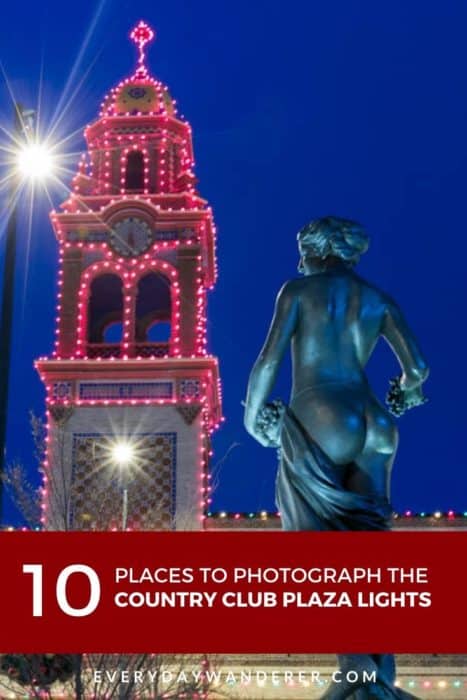 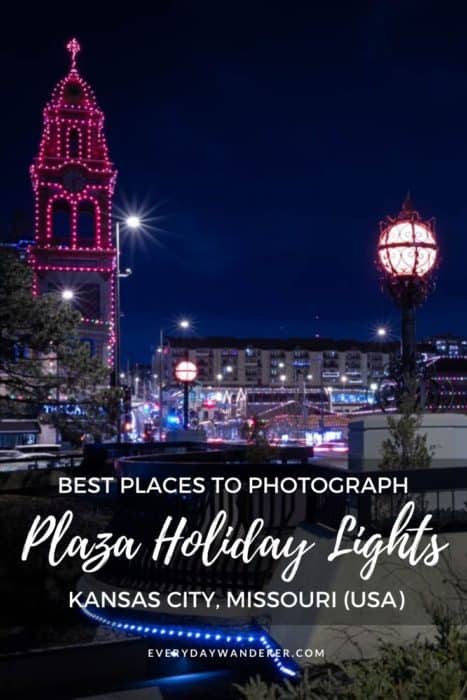 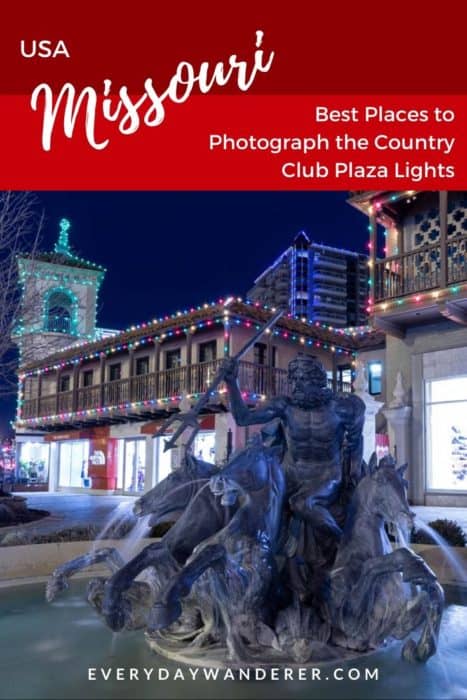 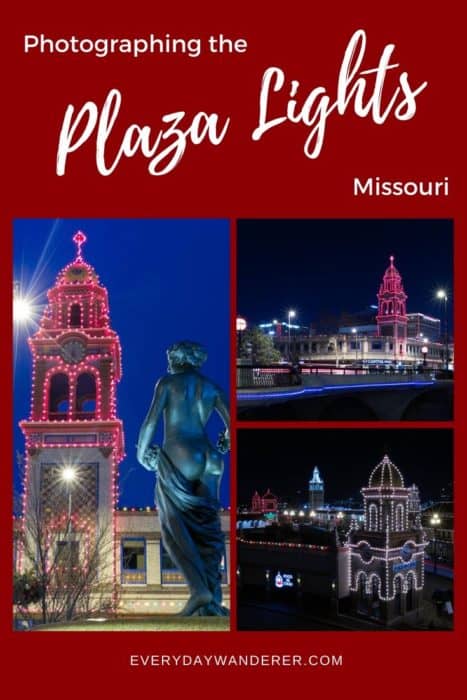