Because English is one of the most commonly spoken languages worldwide, it’s easy for native speakers to venture abroad expecting to use their mother tongue as easily as at home. That’s not always the case, and world travelers might be surprised about when and where English doesn’t work abroad. For example, I was surprised at how many waiters, baristas, and shopkeepers in Berlin didn’t speak English. Thank goodness I knew enough words and phrases to order at the restaurant and find a cash machine!

Even when locals do speak English, they always appreciate travelers who have taken the time to learn about their country, language, culture, and customs.

How Have You Overcome Language Barriers?

Before you board the plane, you should know the official language(s) of the country you’re visiting. When you travel to countries with more than one official language, be mindful of the primary language based on the cities or towns you plan to visit.

For example, the European country of Belgium has three official languages — Dutch, French, and German. If you visit the beautiful town of Brugge, you should know that Dutch is the most prominent language. However, despite being surrounded by the Dutch-speaking, Flemish area of Belgium, French is the most common language in the Belgian capital city of Brussels.

2. Know a Few, Important Phrases in the Local Language

As a kid living in Europe before the European Union was established, English wasn’t as commonly spoken across the continent as it is today. This was especially true when we ventured away from the larger, capital cities of Europe and into the countryside. In part to overcome language barriers, and in part to ensure we weren’t being ugly Americans, my mom and dad always required us to learn a few, important phrases in the local language.

Because this was in the 1980s (also known as the “dark ages” before the internet and smartphones) we learned things like “yes,” “no”, “thank you” and “where is the restroom” from phrase books. In these pocket-sized secret decoder rings, phonetic pronunciations taught us to say s’il vous plait (“please” in French) as “see voo play” rather than “sill voos plate.” While old-school phrase books still get the job done, today’s world travelers also have tools like Babbel and Rosetta Stone to help them out.

Sage Advice:  Be a gracious world traveler by knowing how to say thank you in 65 different languages.

It’s difficult to learn another language, and no one is expected to be fluent in all 7,000+ living languages spoken around the world today. However, just a few phrases in the local language will go far in enhancing your experience and earning the respect of the locals. Here are nine phrases to know in the local language when you travel abroad. 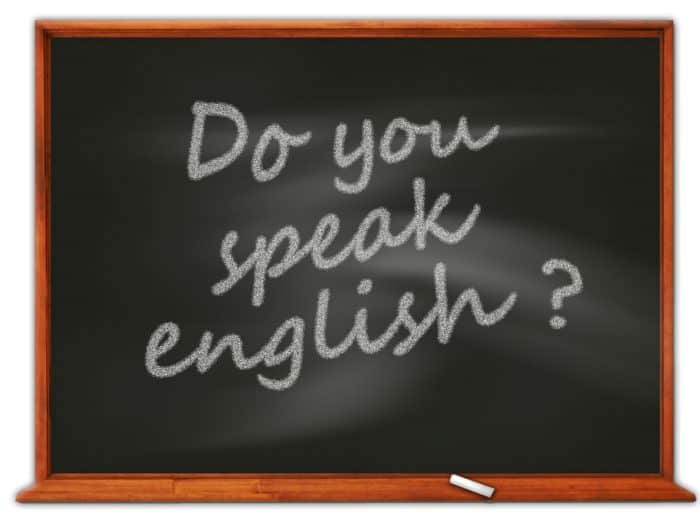 Sage Advice:  Always, always, ALWAYS know how to say, “Do you speak English?” in the local language. Ask this question first and wait for a response before accosting someone with any other questions. You will be surprised at how much more willing the locals are to help you when you take this approach!

If you’re lucky enough to find someone who speaks English, always speak slowly and clearly using basic vocabulary. Don’t use slang and never, ever speak louder in an attempt to overcome language barriers.

One of the reasons that English is so widely spoken worldwide is due to the British Empire. While Americans benefit from English being the international language, it is important to remember that most people who speak it worldwide have been taught Queen’s English. As a result, the local willing to speak English with you will likely use the words:

Related Article:  How to Speak Yankee, A Guide for People Who Speak Queen’s English

The good news about our hyper-connected world is that anything and everything we’d ever want to know is at our fingertips on our smartphones. The bad news is that connectivity can be unreliable or non-existent in parts of the world.

If you have access to digital tools, consider iTranslate, Voice Translator, or Google Translate. These tools can help you understand words and phrases in many world languages, from Afrikaans to Welsh. They may not do it as elegantly as a bilingual native, but they usually get the job done.

Good old Google Translate once saved a colleague from a rough, first night in Sweden. While the locals had left promptly at 5:00 pm to get home to their families, a few of us Americans had opted to work a little longer until it was time for our dinner reservations. My co-worker Chris was working in the office space two floors above Marianna and me. He walked down to the third floor where we were working without realizing the door would automatically lock behind him, separating him from his suitcase.

The good news — we spotted a cleaning woman was at work where Marianna and I were. She should be able to unlock the door for Chris and reunite him with his suitcase.

The bad news — she didn’t speak English. Or French.  Or German.  And those were the languages we collectively possessed among us.

After three failed attempts to find a common language (and several poorly acted rounds of charades), it dawned on me that Google Translate might be the key to overcoming the language barrier.

Another fantastic Google tool is World Lens. This app allows you to snap a pic of printed worlds and immediately translate it from one language to another without a network connection.

Sage Advice:  You can also use technology to learn a language before you travel. I’m a fan of Babbel because its bite-sized lessons are available on any device making it a highly practical way to learn!

5. But Have Old School Back-Up

Books Aren’t Dead, but Your Smartphone Battery Might Be

For those unexpected times when your smartphone’s battery is dead or service isn’t available, you’ll want an old school back-up like a phrasebook or pocket dictionary. They don’t take up much space, and are incredibly helpful ways to stretch the key phrases you’ve learned in the local language like:

Another option is to have cards with key phrases or important information translated into the local language. This is an especially helpful option for travelers with medical conditions or food allergies. A colleague of mine has Celiac disease and relies on these gluten-free dining cards available in up to more than 60 languages to help her clearly communicate her dietary restrictions when traveling internationally.

A French friend armed her teenage daughter with translated cards when the 16-year-old traveled alone from Paris to Kansas City to spend the summer with me. Lissette had a stack of index cards that she could mix-and-match to communicate with Americans here in the US before she reached me. They included phrases like:

Sage Advice:  Always travel with a small notebook and pen or pencil so that you can add to your phrasebook, dictionary, or notecards as needed.

6. A Picture Speaks a Thousand Words

While my artistic talent makes me a Pictionary liability here in my homeland, don’t overlook photos, drawings, and icons as a tool for bridging language gaps. The folks at ICONSPEAK produce t-shirts, caps, tote bags, phone cases, and other products full of icons that can be pointed at to communicate around the globe. While I’m personally a bit hesitant to point at a dinner plate icon on my right nipple as a method of communicating abroad, other world travelers swear by emojis as a tool for overcoming language barriers.

7. Be Mindful of Non-Verbal Differences

Even with a basic understanding of the local language, non-verbal communication difference can cause misunderstanding and confusion. This category of communication includes things like personal space, facial expressions, and hand gestures that can vary widely from country to country.

One of the most common observations about Americans is how much we smile. A lot. Like all the time. In the US a smile is a welcoming, open gesture used widely with everyone we encounter. In Japan, smiling Americans can cause confusion. The Japanese do not tend to outwardly display their emotions, and a smile often conveys anger, sadness, or embarrassment rather than joy or friendliness. In Russia, people only smile when they are truly happy or when greeting someone they know personally. Smiling at a stranger is considered insincere and impolite.

When Yes Means No

When Americans nod their heads up and down, they mean “yes” or are otherwise non-verbally communicating agreement. However, in Greece, Turkey, and other nearby nations, a single nod upward actually means, “no.” 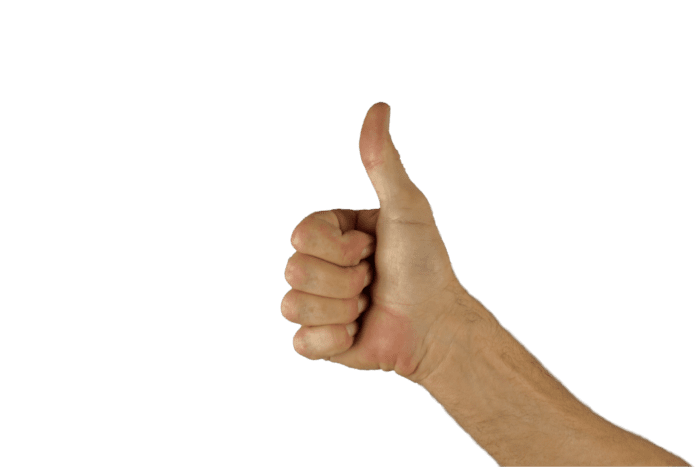 Americans liberally use the thumbs up and okay hand gestures as universal signs of agreement and goodness. Without getting into a lot of details — after all, my mother reads this blog — please know that these gestures translate into very vulgar and rude alternatives elsewhere around the globe.

So wipe that perpetual American smile off of your face, keep your hands at your side, and learn how to say “yes,” “no,” “please,” and “thank you” in the local languages of the country you are visiting!

What Ways Have You Overcome Language Barriers When Traveling?

Have you successfully used one or more of these techniques to bridge communication gaps abroad?  What worked (or didn’t work) for you? Share your thoughts in the comments section below. 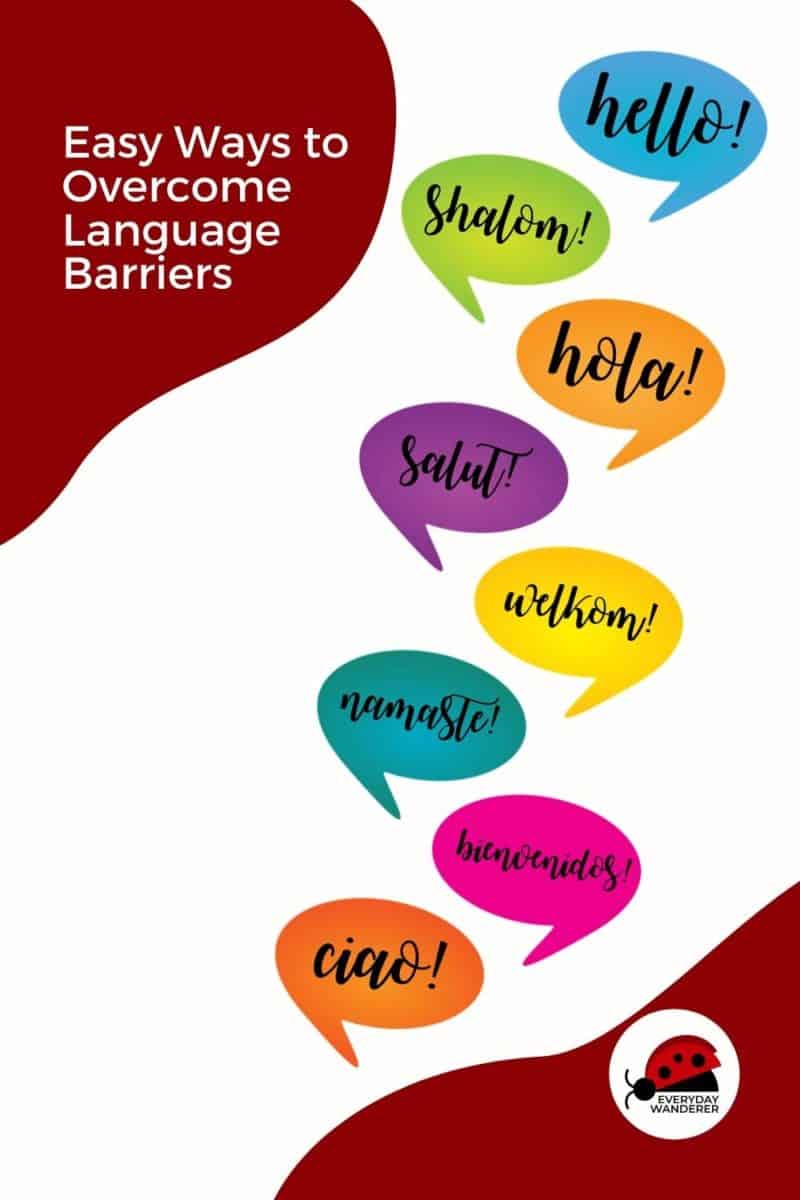 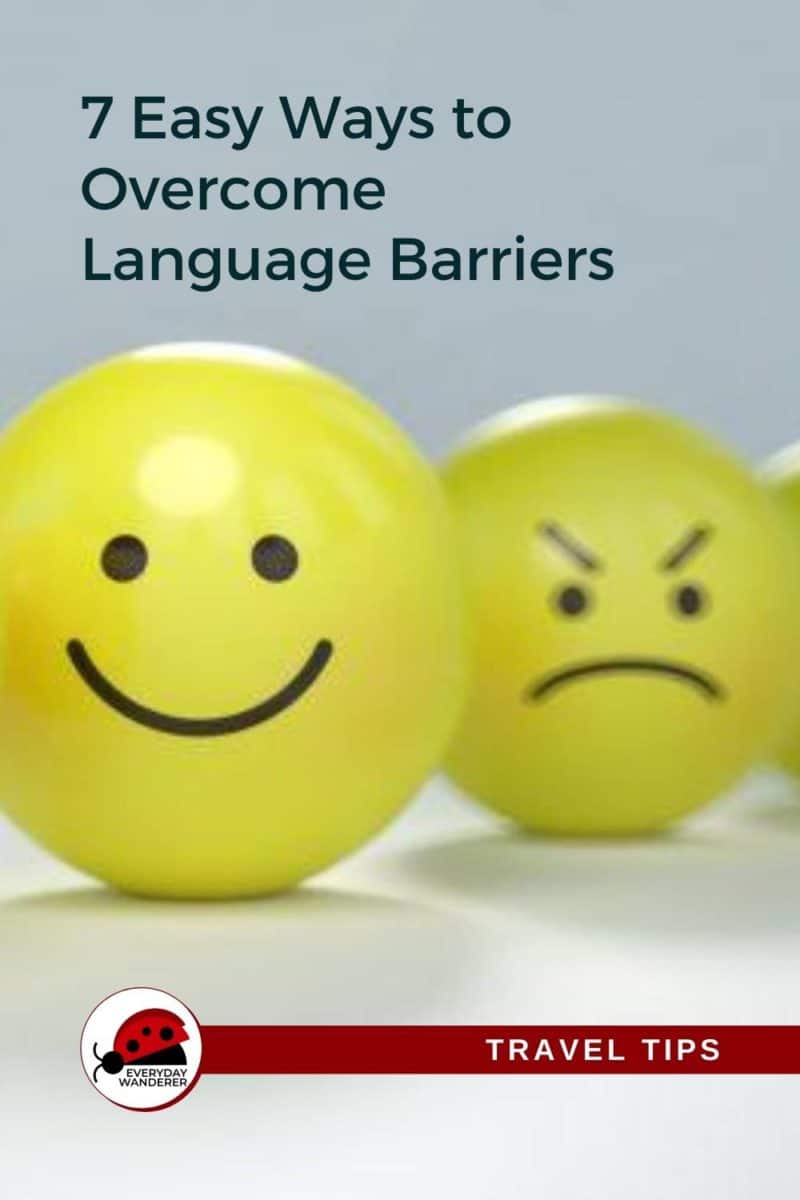 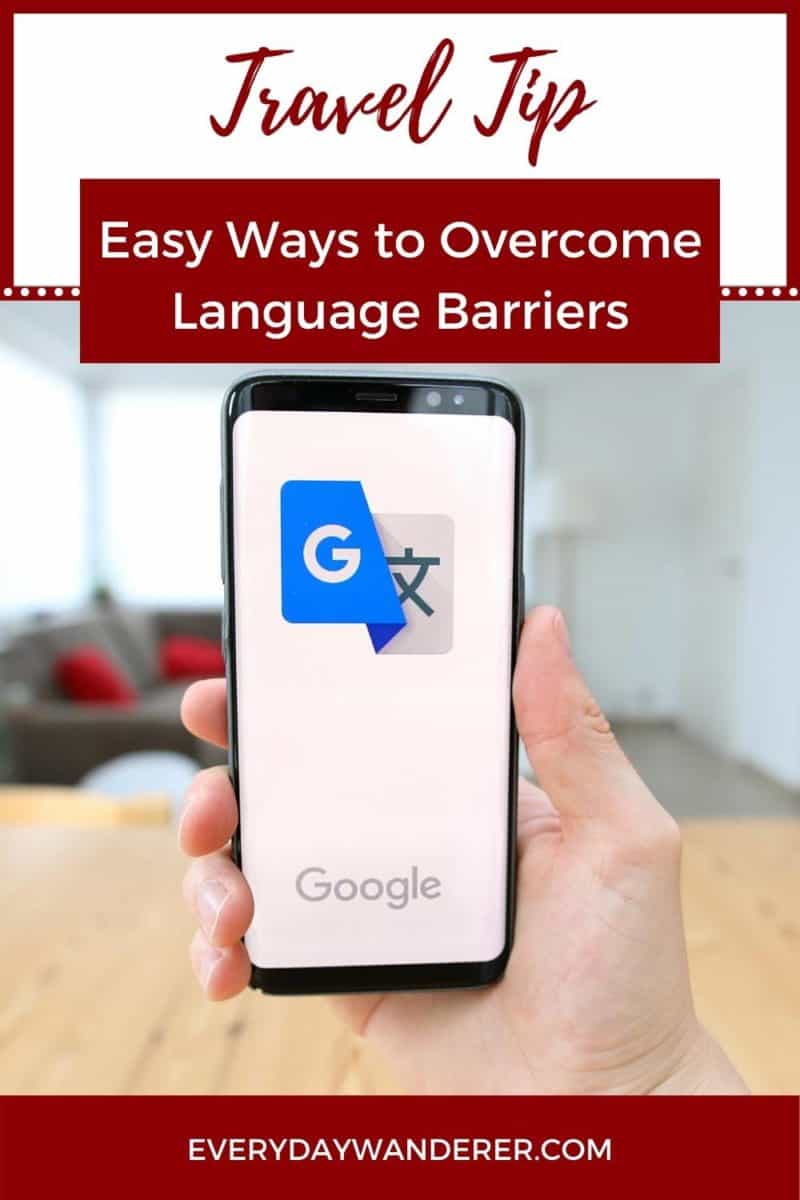 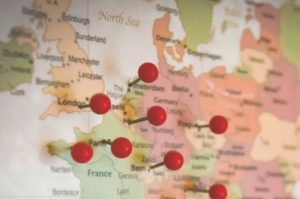 Visiting Europe for the First Time. 100+ things every American should know. 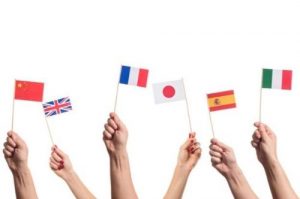 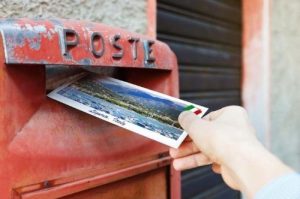 Find travel inspiration by reading these Everyday Postcards from around the world.