Because COVID-19 restrictions vary, it is recommended that you check local advisories and contact attractions, parks, and restaurants before visiting.

For more than 100 years, America has honored the brave men and women who have buttoned up uniforms and sworn to defend the US Constitution against all enemies. Each November, Americans give thanks to all who have served on Veterans Day. And at the end of each May, we honor those who made the ultimate sacrifice, dying in service to our country. But it isn’t until recently that military spouses and military children have been recognized for the sacrifices they make while supporting their loved one who serves. Raised as modern nomads, here are five things you probably didn’t know about military brats.

It’s not uncommon for civilians to perceive career military officers as rigid authoritarians, like Robert Duvall’s character in The Great Santini, or to regard them as arrogant and full of swagger like Tom Cruise’s character in the Top Gun series. But my career army officer father has never been any of those things.

If I had to assign him a Hollywood doppelganger, it would be Alan Alda’s version of Hawkeye Pierce from M*A*S*H. Not only does my dad look a lot like the esteemed actor, with the same dark brown (and now silver) hair and brilliant blue eyes, but he was also very good at his job, approachable, and down to earth.

So when I told my dad that I appreciated how hard he worked during the 20 years that he was in the US Army, but that my mom’s “job” as a military spouse was way harder, he wholeheartedly agreed.

About halfway through my dad’s military career, President Ronald Reagan formally recognized the commitment that military spouses make to the armed forces when their loved one joins the military. Since that proclamation in 1984, the Friday before Mother’s Day honors the important role that military spouses play as the glue that holds military families together.

And while there is no federally recognized day for military brats (yet), Military Brats, Inc. launched Military Brats Day on April 30, 2016. As the group continues to petition Congress to formalize the day to acknowledge and thank military children, it continues to be celebrated on the final day of April.

Are You a Military Brat?

1. The Term “Brat” is Not Offensive to Military Kids

Typically used to describe a spoiled child behaving badly, most kids (and their parents) don’t get warm fuzzies from the word brat. But the term “brat” is not offensive to military kids raised in military families. Instead, it is an expression that unites us as proud members of a unique community of modern nomads.

Have you ever wondered what the term “military brat” means? It is believed to have ties to the British military that pre-date the American Revolution. When wives and children were granted permission to accompany their British service member to an assignment, they were referred to as a British Regiment Attached Traveler, or BRAT. Over the years, the term evolved to describe American military children.

The average military brat moves ten times during his or her childhood. According to the School Superintendents Association, that’s three times more often than civilian kids.

Sage Advice:  Hear how moving frequently as a military brat shaped my views of the world in this episode of the Uncovering Kansas podcast.

Another common perception about military kids is that they spend their childhoods confined to military bases and attending Department of Defense Dependents Schools (DoDDS). While stationed stateside, 80% of military brats live off post and attend public and private schools throughout the United States. When they are stationed overseas, military children often attend DoDDS so that they can be instructed in English and remain aligned with educational requirements when they return to the US. However, they don’t always live on post. And when they do live in military housing, there are still many opportunities to interact with the locals.

When my family lived in the Netherlands, I attended an international school with US, British, Canadian, and German sections, which gave my sisters and me many unique opportunities to learn foreign languages, celebrate diverse holidays, and experience different teaching techniques. Additionally, we had one hour of instruction by a local Dutchman each week who taught about the culture, geography, history,  language, and food of the Netherlands.

Whether it’s frequent moves during peacetime or the stress of a parent being deployed to a combat zone, military brats are challenged to develop unique coping skills. While generalizations never apply to 100% of any community, military brats often possess specific qualities. Characteristics of military brats often include being resilient, adaptive, and worldly.

Kids Who Grow Up in Military Families are Resilient

Because children in military families are asked to frequently uproot their lives by moving from one assignment to another, they develop a unique resiliency that isn’t typically part of a civilian childhood. And the nation’s military needs rarely align perfectly with the school year. So military brats are often expected to not only move in the middle of a quarter or semester but to pick up the curriculum, instructional materials, and timelines of their new school without missing a beat.

While my dad was stationed overseas without my mom or me during the Vietnam War and was occasionally away for several weeks at a time when I was growing up, I never knew the absence that navy families do when their sailor is at sea for months at a time. And I certainly can’t personally appreciate the heartbreak of the two million children who have experienced parental deployments since the September 11th terror attacks in 2001.

By regularly being the new kid in the neighborhood, at school, on the baseball team, and on the dance squad, military brats learn to adapt to new environments, new faces, new rules, and limited historical context. While it’s understandable that children who have known each other since preschool may not instinctively welcome the new kid, it is second nature for military brats to seek out the new kid and bring them into the fold.

Because military brats typically spend much of their childhoods away from their extended families, another way that they adapt is by building deep relationships with friends, neighbors, and other military families who become surrogate grandparents, aunts, uncles, and cousins. My sisters and I forged a tight bond with an older couple who lived down the street from us in the Netherlands, calling them oma and opa (the Dutch names for grandma and grandpa). And although it’s been two decades, I still keep in contact with my parents’ closest friends, who were like aunts and uncles, and their children, who were like cousins.

Whether military brats move from DC to Dallas or from Georgia to Germany, they are exposed to different celebrations, cultures, expressions, foods, and history. So when a third-grade class in St. Louis is learning fun facts about the Washington Monument from a textbook or video, the military brat has likely been to the top of the stone obelisk. And when a middle school class in Atlanta is reading Anne Frank’s The Diary of a Young Girl, the military brat has likely attended a World War II memorial service at the Normandy American Cemetery on a cliff above the landing beaches in France.

5. The Impact of a Nomadic Childhood Follows Military Kids into Adulthood

While I wouldn’t change my upbringing for the world, my childhood as a modern nomad means that my kids have never (and will never) get to visit one of the more than 10 homes I lived in as a child. When new acquaintances ask where I grew up, my answer isn’t “Kansas City” or “Washington, DC” or “Germany.” Instead, my response is the military kid’s common refrain: “I’m a military brat, so I lived all over” or “I don’t have a hometown.”

And don’t even get me started on what it’s like to answer all of those security questions required to access my bank accounts, 529 plans, and retirement funds online.

An Ode to Military Kids

The following military brat poem is credited to “Anonymous” and published at the end of my friend’s military brats book, An Army ABC Book.

My hometown is nowhere.
My friends are everywhere.
I grew up with knowledge that home is where the heart is and the family is.
Mobility is my way of life.
Some wonder about roots, yet they are as deep and strong as the mighty oak.
I sink them quickly, absorbing all an area offers and hopefully giving enrichment in return.
Travel has taught me to be open.
Shaking hands with the universe, I find brotherhood in all men.
Farewells are never easy.
Yes, even in sorrow comes strength and ability to face tomorrow with anticipation.
If when we leave one place, I feel that half my world is left behind,
I also know that the other half is waiting to be met.
Friendships are formed in hours and kept for decades.
I will never grow up with someone, but I will mature with many.
Be it inevitable that paths part, there is a constant hope that they will meet again.
Love of country, respect and pride fill my being when Old Glory passes in review.
When I stand to honor the flag, so also do I stand in honor of all soldiers,
And most especially, to the parents whose life created mine.
Because of this, I have shared in the rich heritage of military life.
~ Anonymous

If you grew up in a military family, you’re in good company! Did you know that these famous people are military brats?

Do You Know a Military Brat?

Of the 15 million estimated military brats in the US today, about 1.2 million are under the age of 18 and spending their childhoods as part of military families. While military brats give up many childhood experiences, such as the chance to plant deep roots or having a parent at home rather than far away for extended periods of time, this special community also builds strong bonds, develops important life skills, and enjoys incredibly unique experiences. 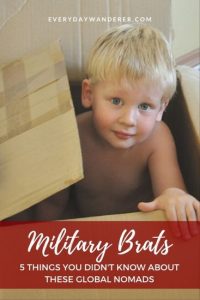 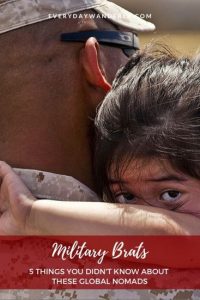 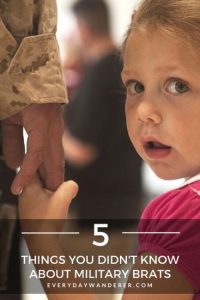 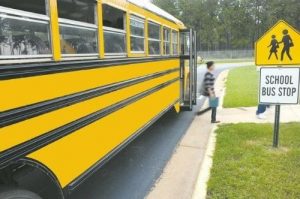 How to Take Your Kids Out of School to Travel. Without making enemies in the front office. 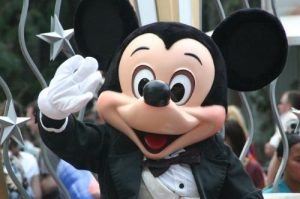 Why I’m NEVER Taking My Kids to Disney 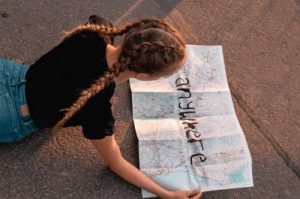 Planning Family Travel with a Full-Time Job and School-Aged. A proven three-step process!