Rex presides over a parade featuring festive floats that fling beaded necklaces, coins, and even coconuts into the crowd. Revelers take to the streets in elaborate masks and glittery costumes. And party-goers search for a naked plastic baby in their slice of king cake. It’s Mardi Gras season in New Orleans! But do know the fascinating history behind these Mardi Gras traditions?

I’ve partnered with Hotels.com to share the fascinating history of these Mardi Gras traditions that you’re sure to experience when you celebrate Mardi Gras in New Orleans.

As a kid living in Maastricht, in the southern (and predominantly Catholic) part of the Netherlands, I loved Carnival. (Or Carnaval, as the Dutch spell it.) Celebrated in the spring, Dutch Mardi Gras is like Halloween, only infinitely better.

Carnival festivities begin just after 11 o’clock Sunday Mass ends, six weeks before Easter. And for three days leading up to Ash Wednesday, daily life grinds to a halt as the entire town fills the streets with colorful costumes and festive parades.

One of the biggest differences between the two Carnival celebrations is the length. In New Orleans, Carnival starts before I have my Christmas decorations put away. That’s right! Just 12 days after Christmas, while kids are still on winter break and I’m enjoying the last crumbs of rum cake, Carnival celebrations kick off like clockwork on January 6th in Louisiana.

And because Carnival runs through Fat Tuesday, a date that moves around the calendar based on the phases of the moon, Carnival in New Orleans can vary in length. It’s been just under a month long (like when Ash Wednesday was February 4th) and it’s been as long as nearly nine weeks (when Ash Wednesday was March 10th). Nine weeks?!? Heck, that’s nearly as long as most American retailers have Christmas decorations in their stores, which is really saying something!

Before you head to New Orleans to devour King Cake and catch purple, gold, and green beads, here are the fascinating meanings behind the most recognizable Mardi Gras traditions.

Sage Advice:  From where to watch the parades to how to recycle your Mardi Gras beads, here’s everything you need to know before you celebrate Mardi Gras in the Big Easy.Mar

Do You Celebrate Mardi Gras?

Where Did Mardi Gras Originate?

In Europe during the Middle Ages, Christians would binge-eat meat, cheese, eggs, and milk just before the Lenten season. Beginning on Ash Wednesday and lasting through Easter Sunday, Lent is a solemn and spiritually-reflective period that often includes ritual fasting.

Today, modern Christians (especially those who are Catholic) celebrate Mardi Gras (or Fat Tuesday) as a last chance to enjoy meat, sugar, and alcohol before giving them up during Lent. 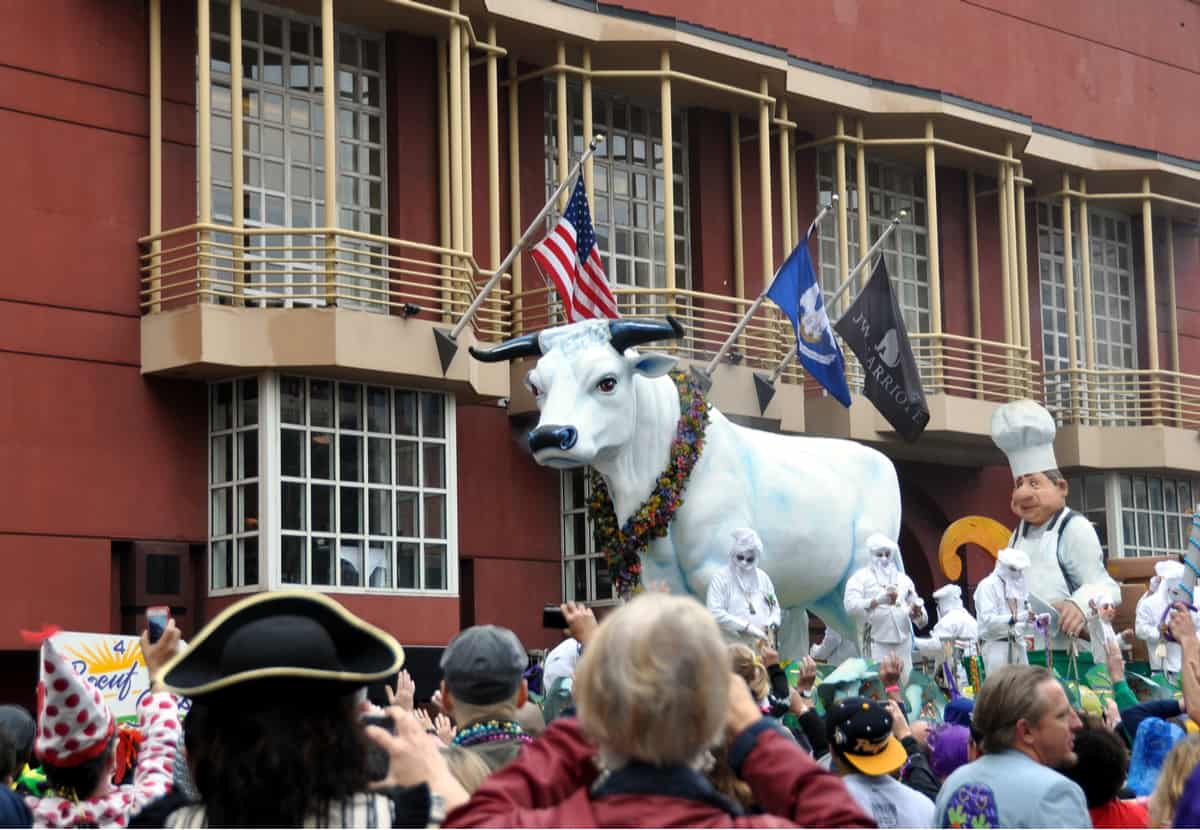 Why are Parades Held During Carnival?

In the mid-1800s, Mardi Gras celebrations in New Orleans were literally out of control. Local officials threatened to outlaw the pre-Lenten celebrations, but the Mistick Krewe of Comus stepped in and saved Mardi Gras.

This secret society was founded in late 1856 and members committed themselves to creating a more organized method of celebrating Carnival. The first Mardi Gras night parade took place a few months later, featuring a torch-lit procession of elaborate floats, marching bands, and revelers in masked costumes.

Why is the King of Mardi Gras Named Rex?

This tradition dates back to 1872 and is tied to a surprising international guest. When Russian Grand Duke Alexis Romanov toured post-Civil War America, his itinerary placed him in New Orleans at the end of Carnival. And the Big Easy seized this unique opportunity.

Shortly before the duke arrived, New Orleans newspapers announced that a self-proclaimed “King of Carnival” named Rex (the Latin word for King) would be organizing that year’s festivities. When Fat Tuesday arrived, the parade route was packed with locals who enjoyed a procession of kings, harlequins, peasants, and even a costumed version of the Russian duke, the guest of honor.

Today, Rex symbolically rules Mardi Gras. Known as the King of Carnival, Rex is a member of the Rex Organization who is crowned king due to his prominent role in the community and active participation in philanthropic and civic-minded projects.

Sage Advice:  You may call him King of Carnival or the Monarch of Merriment, but never King Rex. Because rex is the Latin word for king, that’s like calling him King King. And repeating words during Mardi Gras in the Big Easy just cuts into your celebration time! 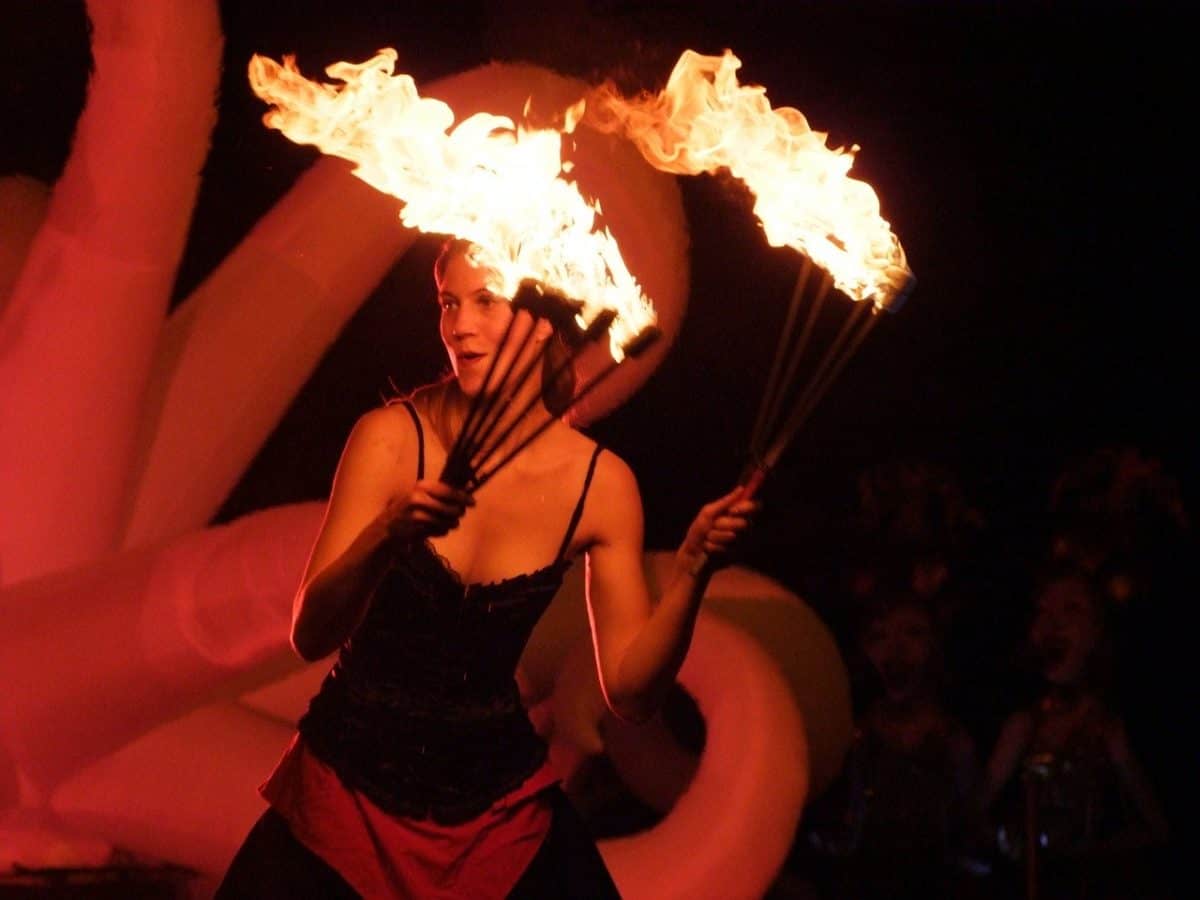 Why are Flaming Torches Carried During Mardi Gras Parades?

Known as flambeaux, these flaming torches date back to the first Mardi Gras parade organized by the Mistick Krewe of Comus. Originally, the torches were necessary to light the way during the night parade. But with streetlights and other modern conveniences, they flambeaux are simply part of the festivities in 21st century Mardi Gras celebrations.

What do Mardi Gras Colors Mean?

Mardi Gras colors are purple, gold, and green. Once again, this tradition dates back to Russian Grand Duke Alexis’s 1872 visit to Mardi Gras. The three hues are said to be tied to these virtues:

As legend has it, the duke came bearing gifts, and his welcoming committee handed out a strand of glass beads to folks demonstrating the color’s significance.

Why is King Cake Eaten on Mardi Gras?

King cake made its way to New Orleans via France. Like meat, eggs, and cheese, European Christians in the Middle Age feasted on this round cake before giving up sweets during Lent. Tasting like a cinnamon roll and looking like a braided Bundt cake, today king cake is typically decorated with purple, gold, and green accents.

Hidden inside one bite of king cake is a small baby representing Jesus. It is a symbol of Epiphany, celebrated on January 6th, when the three kings (also known as the three wise men) visited the newborn King of Glory with gifts of frankincense, gold, and myrrh.

If you’re the lucky one who discovers the plastic baby in your bite of cake, it is generally expected that you’ll have good luck and increased prosperity in the year ahead. You may also be crowned king for the day, or at least the duration of your Mardi Gras celebration.

Why Are Mardi Gras Masks Worn?

It is generally believed that Mardi Gras evolved from pagan festivals celebrated throughout the Roman Empire. Feted at the end of December, Saturnalia was an upbeat, party-like celebration where social norms were set aside. In order to cross-dress with confidence and escape class constraints, Saturnalia involved donning elaborate masks and over-the-top costumes to hide each reveler’s true identity. Think of it as the original Masked Singer, only without singing.

Fun Fact:  Believe it or not, wearing masks, hoods, and facial disguises is typically outlawed in New Orleans. However, exceptions are made during Mardi Gras. And, if you are riding on a Mardi Gras float, by law, you must wear a mask.

Christmas in the Netherlands
Fascinating facts that will surprise you (especially #12)
Read More
Jackson Hole, Wyoming
Best things to do in winter (besides ski)
Read More
Mall of America
What you need to know BEFORE you go
Read More
Do High Altitudes Make You ___?
Answers to all of your embarrassing questions
Read More
Never Taking My Kids to Disney
Read why before you judge me
Read More
Previous
Next

Why Are Beads and Other “Throws” Tossed from Mardi Gras Floats?

It’s believed that the original Rex who ruled over Mardi Gras in 1872, when Russian Grand Duke Alexis Romanov was in attendance, tossed beaded necklaces and “jewels” to his “loyal subjects” as he glided through New Orleans on his parade float.

By the early 1920s “throws” from floats evolved into the Mardi Gras tradition we know and love today. Parade goers will be treated to all sorts of goodies and trinkets, from plastic Mardi Gras necklaces to special Mardi Gras coins known as doubloons that are unique to each Mardi Gras krewe. Some parade attendees may even go home with stuffed animals or a coveted Mardi Gras coconut. The Krewe of Zulu began passing out coconuts in 1910 because they were a less expensive throw than the traditional Mardi Gras beads.

Sage Advice:  Despite conventional wisdom, you do NOT need to bare your breasts to get beads. Simply shout, “Throw me something, mister!” and may the Mardi Gras force be with you!

Fun Fact:  Louisiana is the only state in the union that recognizes Mardi Gras as a legal holiday. 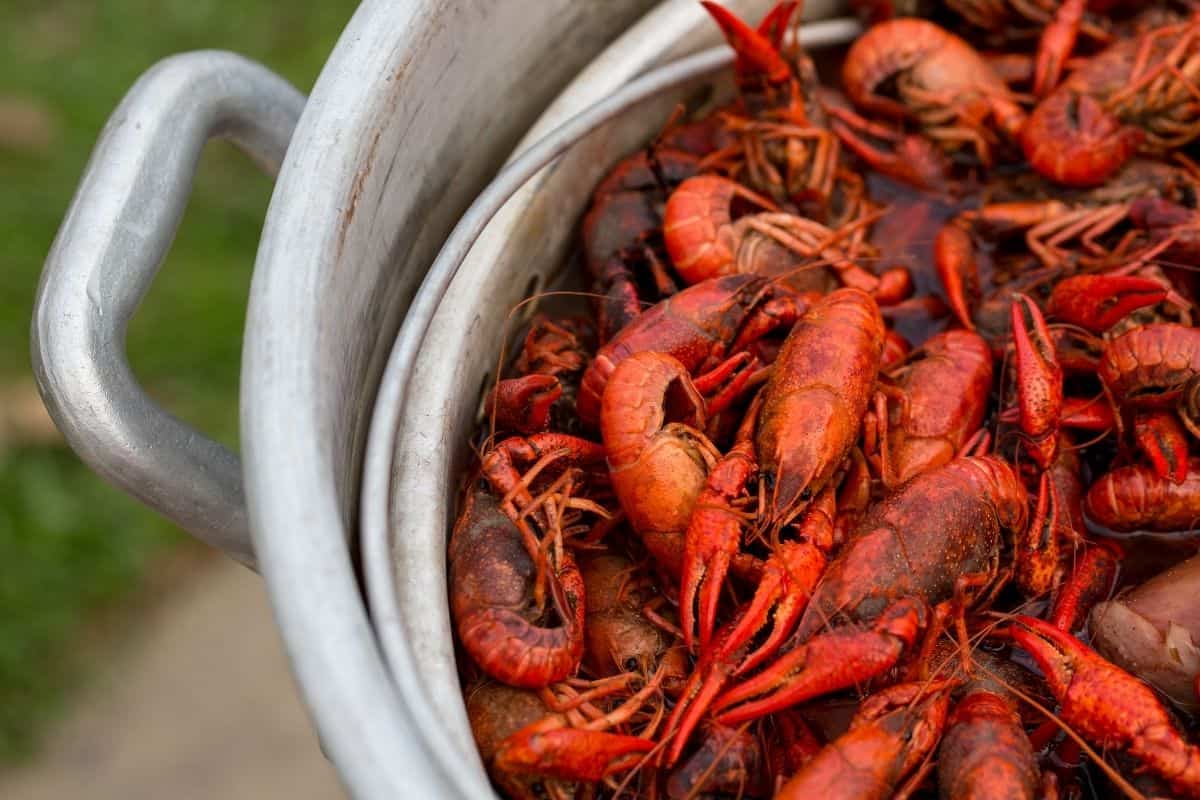 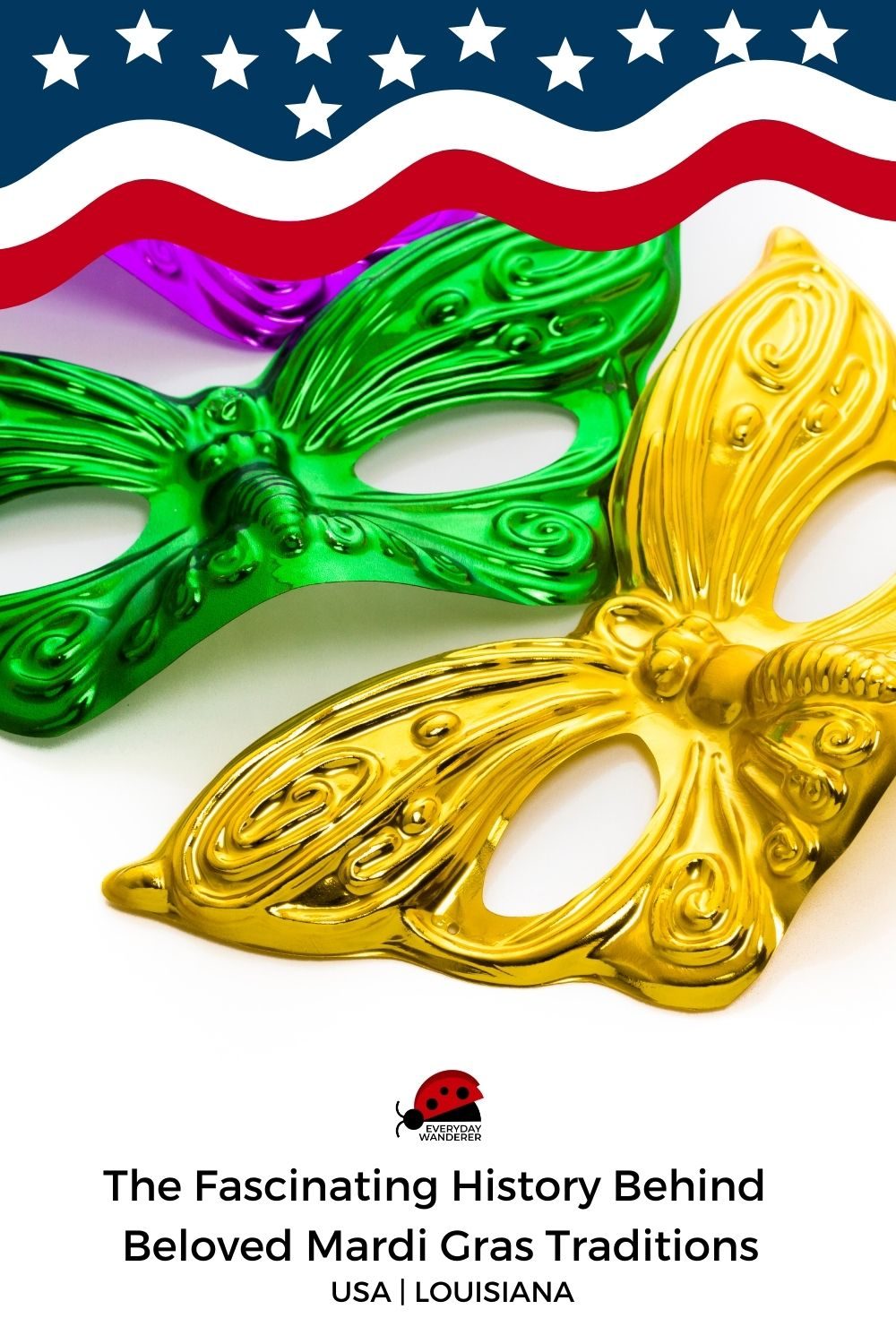 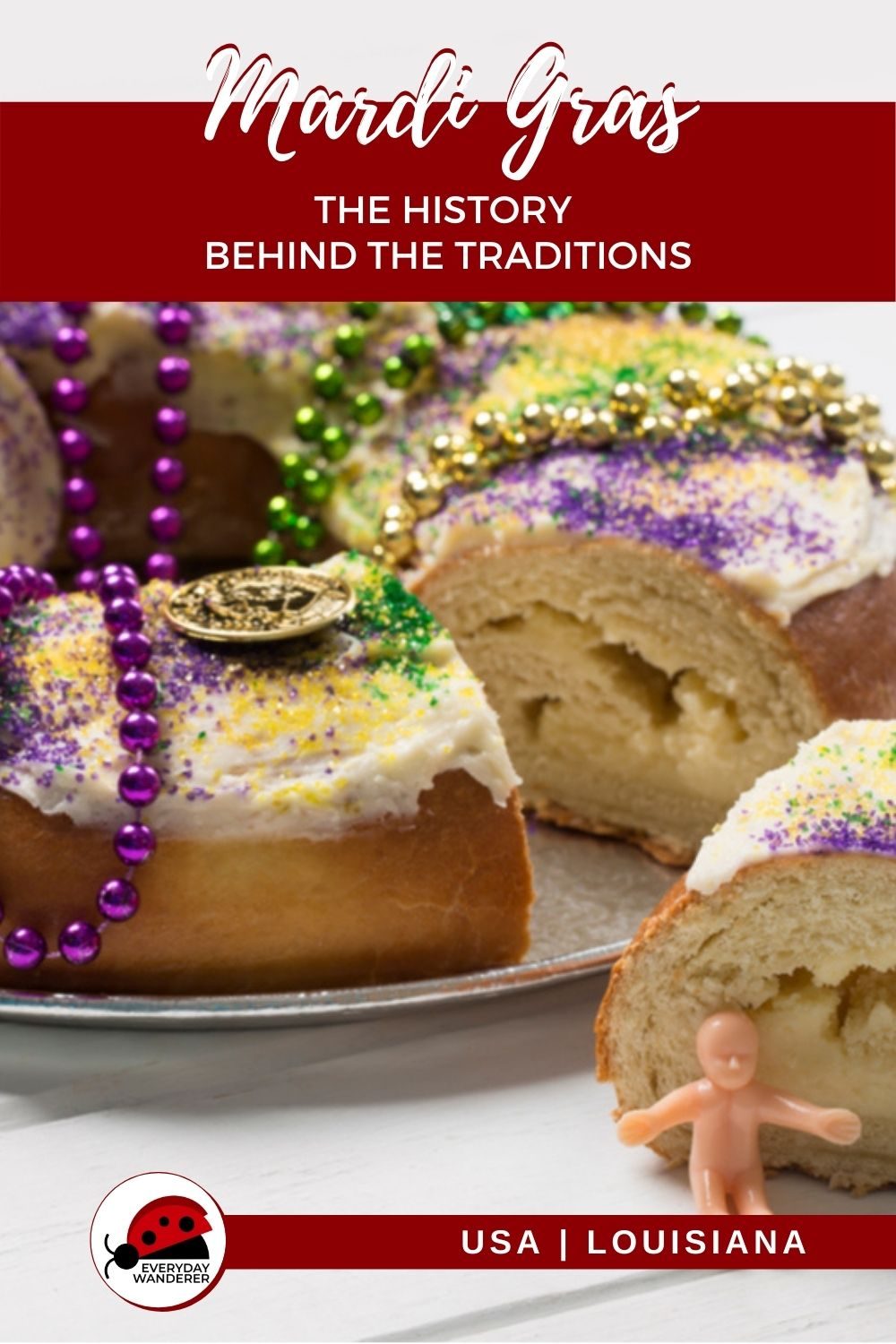 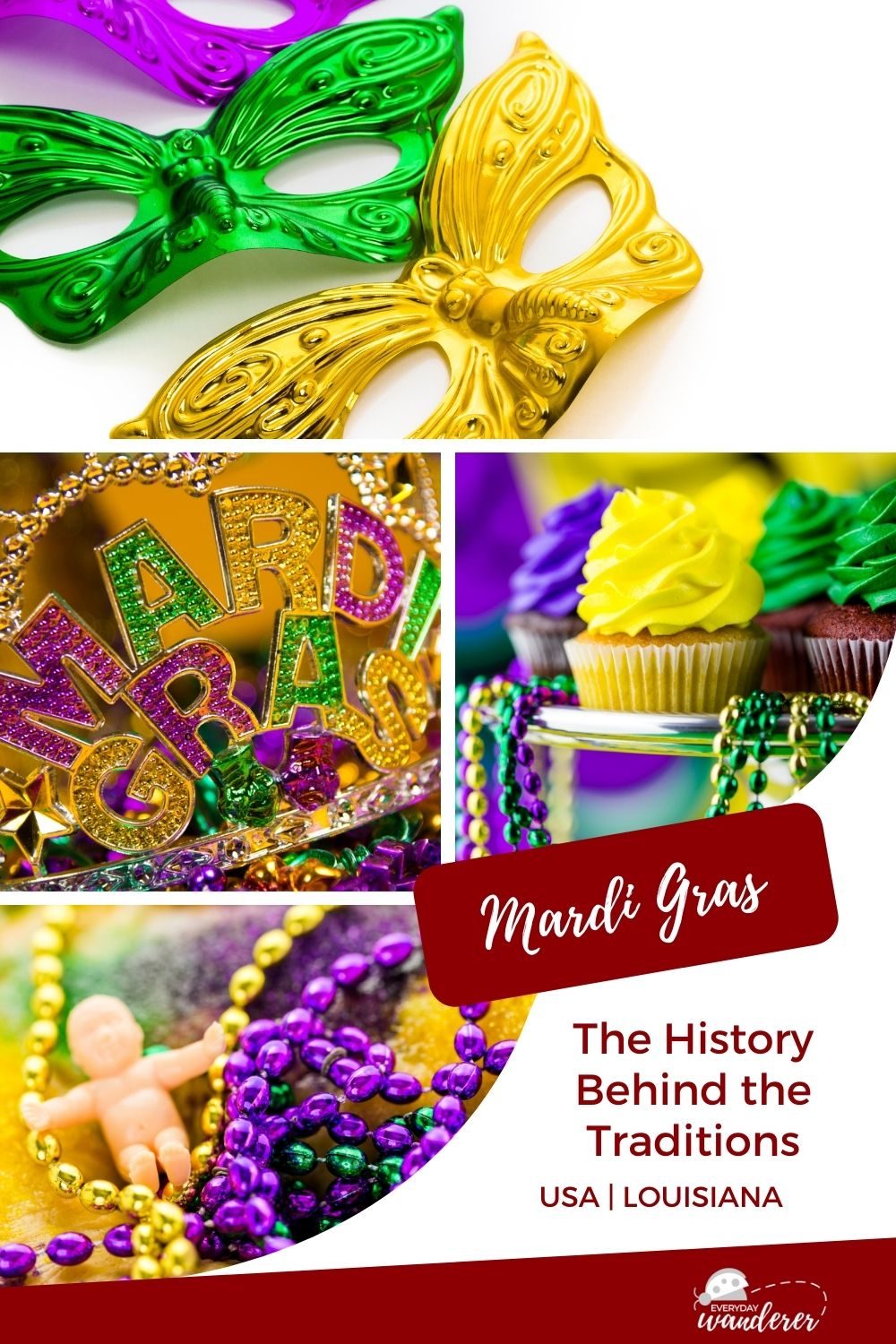 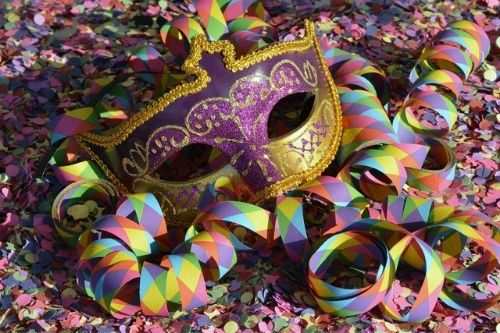 Mardi Gras in New Orleans. Everything you need to know BEFORE you go. 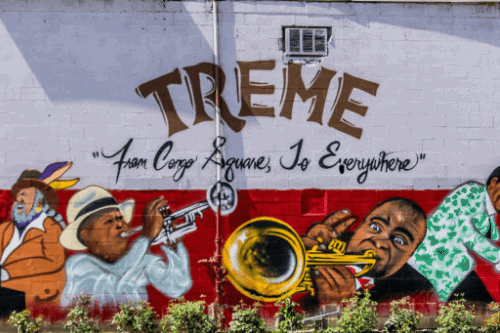 Black History. The best places to learn about black history in the South.

26 thoughts on “The Fascinating History Behind These Mardi Gras Traditions”

Copyright 2021. Made with love in Kansas City by Sage Scott.