Because COVID-19 restrictions vary, it is recommended that you check local advisories and contact attractions, parks, and restaurants before visiting.

After visiting the Greek island of Crete for the first time, Gabi fell in love with the town of Chania. Located on the northern coast, come learn about its rich history, walk along the pink sand beaches, and enjoy its flavorful local cuisine in this Everyday Postcard.

After taking a long walk along the pink sand beach, photographing the historic Old Venetian Port, and guiding a gastronomic walk through Chania, Gabi had a few minutes to send this Everyday Postcard:

Isn’t this pretty? I took this picture as the sun was setting behind the clouds over the old Venetian harbor in Chania, one of the most stunning cities on the Greek island of Crete. I love how the shapes of the fortress and the Egyptian lighthouse contrast with the orange palette of the skies. You should make some time to see how beautiful Chania is… besides, Cretan food is yummy!

Gabi is a travel writer born in Buenos Aires, who’s been traveling and living abroad for the past 20 years. She has a degree in translation and loves backpacking with her kids and taking pictures.

She’s been living in the town of Chania on the Greek island of Crete for the past four years and has no intention to leave! She writes for local and international media and, every summer, she hosts gastronomic walks of Chania. Gabi recently published a book about the Greek islands and writes about Crete in her blog The Tiny Book. 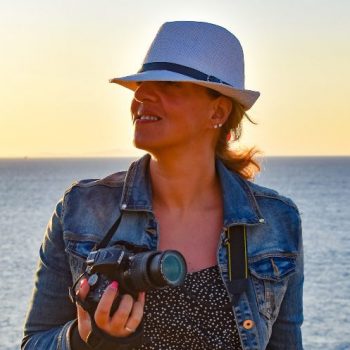 For those of us who haven't visited yet, give us an overview of Chania.

Chania is on the Northwest coast of the island of Crete, the largest and southernmost island in Greece. The city lies right on the Sea of Crete, in a region known for its rugged landscape with peaks rising up to 2,400 meters (about 7,875 feet). Chania also boasts one of the most exotic coasts of the Mediterranean, ranging from turquoise lagoons to pink sand beaches!

The island has a complex history of foreign occupation — in fact, not everyone knows that Crete has belonged to Greece only over a hundred years! Virtually every culture that flourished or dominated the Mediterranean has left an influence on Crete! From the Minoan civilization in the Bronze Age to the German occupation in WWII.

Foreign influence has shaped the character of the city, which is home to very ancient ruins, as well as Venetian mansions, Turkish minarets, Catholic churches, and one of the oldest synagogues in Europe! 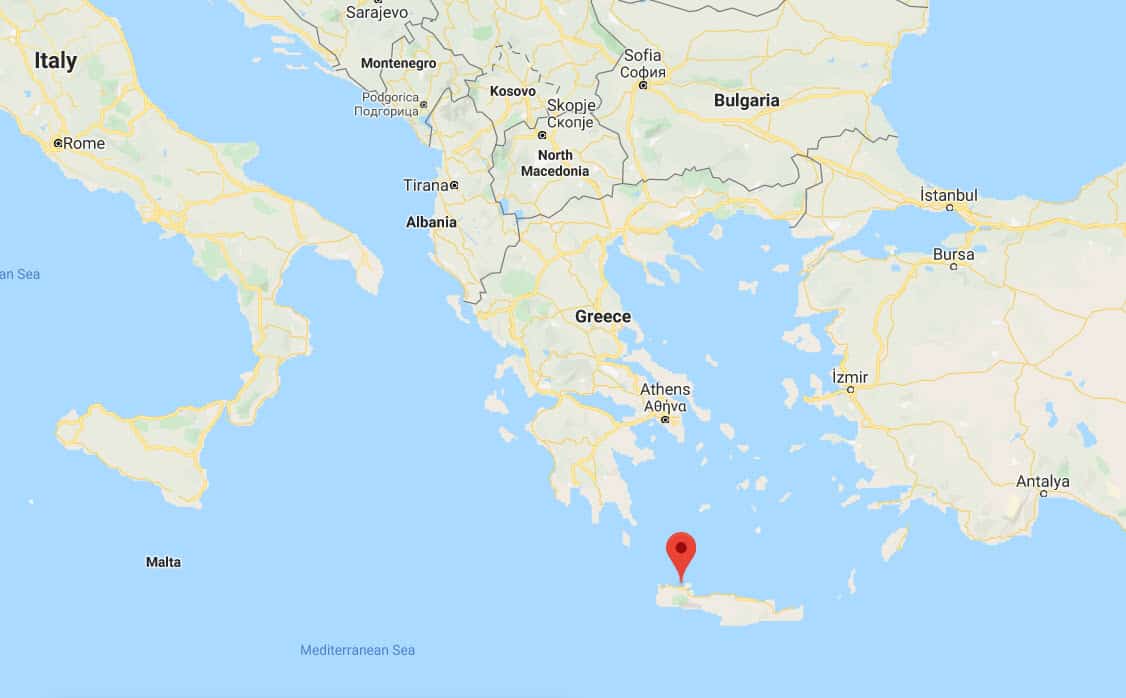 How did you decide to visit Chania?

I first came to Chania after visiting several Greek islands over the years. I longed to see something different and I must confess that Crete stole my heart!

This island has nothing to do with the classic landscape made of whitewashed cubic houses and blue domes. Yet, it is one of the most magical places I’ve ever been too! It has a special charm that’s very hard to define and that makes you eager to discover more… and come back.

After I was established on the island, I started working with tourists, and it didn’t surprise me a bit to find out that absolutely everybody I meet makes a point to come back. Most of them are in Chania for the second or third time! Besides, Crete is so big that you would need ages to explore the whole of it!

What's the best way to get to Chania and the Island of Crete?

Getting to Chania is fairly easy during the summer as there are direct flights from all over Europe. Alternatively, you can land in Heraklion, Crete’s capital, and reach Chania by bus or car.

If you’re based in the States, you’ll need to fly to Athens first and from there, either  take a domestic flight or an overnight ferry.

What are your favorite things to do in Chania?

There are many things to do both in the city and across the island. If you want to stay local, a walk along the streets of the old town is one of the most romantic things to do. There’s plenty of choice too. The Venetian quarter is the most elegant area of the old town. It’s the place where doges (the chief magistrate) and rich merchants used to dwell during the Venetian occupation. Some houses had an exit to the harbor where these merchants kept their boats. Today, these have been transformed into beautiful bars and restaurants.

The Turkish quarter of Splantzia has a unique bohemian flair. The houses there are more modest, but also more picturesque. The neighborhood surprises you with hidden open patios, lush pink bougainvillea, and the last remaining minarets in town.

Those a bit more adventurous should hire a car and move around the island. One of the best day trips in the area is a scenic drive through the gorge of Topolia, which lands you directly on Elafonisi, one of Crete’s most beautiful beaches. It has alluring emerald waters and a unique shore of pink sand.

How did you travel around on such a big island?

Despite the region having a great bus network, especially on the more developed northern coast, I always suggest visitors to go ahead and rent a car to reach the south. A car gives you the freedom to get lost in hidden villages and, to discover isolated bays.

One of the best parts of travel is experiencing the local flavors. What was your favorite meal on Crete?

Oh Gosh! Where does one start? The food on Crete is heavenly. It’s probably the simplest but tastiest cuisine I’ve ever tried, and it’s plain healthy. The Cretan diet, which is at the origin of the Mediterranean diet, is largely based on fresh and seasonal ingredients. The incredibly fertile land contributes with a magnificent selection of vegetables and everything is rigorously seasoned with local herbs, sea salt, and top quality extra virgin olive oil from the region.

Crete is one of the world’s first producers of olive oil from a very small olive variety called Koroneiki which is super fragrant and adds strength and spiciness to every dish.

There’re so many unique local dishes to taste that I chose to specialize in the local cuisine! Besides, the island is home to 13 indigenous grape varieties that produce outstanding wine labels. Crete’s food and wines are at the core of my gastronomic walks in the old town!

Did anyone travel to Chania with you?

Yes, I traveled with my family, and I must say that my two kids love Chania a lot. They already feel like locals and speak Greek fluently (a skill I still can’t seem to manage). The city is truly kid-friendly, with museums, archaeological sites, outdoor sports, water sports… and even skiing in winter!

What sights cannot be missed when visiting Crete?

Other than exploring the old town and the modern city, a place you shouldn’t skip is Balos Beach and Lagoon. The place is really a must!

Balos is about 50 minutes from the center of the city, and it’s one of the most spectacular beaches on earth. Its magic reveals slowly as you hike, for about 15 minutes along a well-marked path, directly down to the shore. The magnificent colors of the lagoon and the harsh surrounding nature will leave you in awe, trust me!

What's the weather like on the Island of Crete?

The weather on Crete is mild all year long. The northern side of the island is closer to Europe, so it has a more Mediterranean climate. Our winters are short, but they can be very cold too. There are some rains, especially in the region of Chania.

The island is cut in two by a series of high mountain ranges that work as a barrier and differentiate the weather on the northern coast from the warmer south.

Summers can be really long and dry with very high temperatures and almost no rain at all between April and October.

One of the reasons I love Chania is because of the locals. I’ve always believed that Crete is beautiful, especially because of its people.

Crete is known for its legendary hospitality, a genuine trait in the character of the community that never ceases to amaze me.

There’s even a word to describe this generosity of spirit, the Greek term philoxenia, which usually translates as love for the stranger, but that has a much deeper meaning. Hospitality has always been a virtue, a way to show honor and respect to the guest. It’s a very old tradition that survives and is pretty much alive since the ancient times.

What's one thing travelers can't forget to pack when they visit Chania?

You can find everything you want and prices are fairly affordable for tourists. However, if you have your own favorite sunscreen lotion, it’s a good idea to bring it along as the sun can be merciless in summer. Use it on the beach but also when you on the streets, in the mountains, or even when visiting an archaeological site. Pair it with a hat and you’ll be safe.

There are many excursions you can take in the region of Chania if you are an intrepid traveler, a good pair of hiking shoes will allow you to move and feel comfortable on any kind of terrain.

Another thing that you could pack  is your own water bottle. The water in Chania comes from the White Mountains and is perfectly safe to drink. Locals don’t bother buying mineral water at all! You should do the same… besides you will be helping keep our environment cleaner. Remember that it’s very hard to get rid of waste on an island.

As a last tip, don’t forget your photography equipment. Chania is a collection of unique landscapes that you will want to treasure forever… or at least until your next visit! 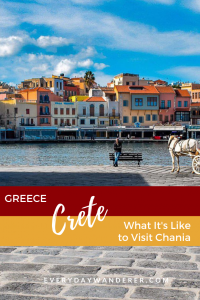