The Cincinnati Bell Connector, Cincinnati’s modern streetcar, makes it fast, easy, and affordable to experience the city’s downtown, uptown, and Over-the-Rhine neighborhoods. Here are ten sights to see in Cincinnati via the Cincinnati streetcar.

Cincinnati’s streetcar, the Cincinnati Bell Connector, started operating in September 2016 and is an affordable way to see the sights of Cincinnati for less than a latte. It runs in a 3.6-mile loop from Cincinnati’s beautiful riverfront through its downtown and into the historic Over-the-Rhine neighborhood.

Have You Explored Cincinnati by Streetcar?

Here are 10 Cincinnati sights you can see via the Cincinnati Bell Connector streetcar.

Founded in the mid-1800s by the mass of German refugees that arrived in Cincinnati, the Over-the-Rhine neighborhood experienced an economic decline during World War I that only got worse from there.  Fast forward to 2004 when Cincinnati’s non-profit Cincinnati Center City Development Corporation (C3DC) started investing more than $200 million into renovating dilapidated buildings, developing vacant lots, and attracting businesses.

Today Cincinnati’s Over-the-Rhine neighborhood is once again bustling with restaurants and boutiques. Experience it all at the 12th & Vine stop on the Cincinnati Bell Connector, Cincinnati’s streetcar.

Named after General James Findlay, an early Cincinnati settler and former mayor, the Findlay Market is the only surviving public market house of the nine that once operated in Cincinnati. When the Queen City was rapidly growing in the 1800s and 1900s, public markets were the primary place that city residents could purchase perishable food like meat, fish, cheese, bread, fruits, and vegetables.  Today the Findlay Market continues to showcase a variety of merchants, from Areti’s Gyros to Zinncinnati.  See the complete list of vendors here.

At the turn of the 19th century, Cincinnati was the nation’s third-largest beer producer by population. This was largely due to the Queen City’s Over-the-Rhine neighborhood of German immigrants who brought a strong brewing tradition with them from their homeland. Sadly, America’s prohibition against alcohol in 1919 closed many of Cincinnati’s breweries forever.  In the years that followed, the majority of brewery buildings were either torn down or fell into ruin.

As the overall Over-the-Rhine neighborhood started experiencing a renaissance in the mid-2000s, so did its Brewery District.  The Rhinegeist Brewery brewed its first batch of beer in June 2013 in the remains of the old Moerlein bottling plant built in 1895.  While parts of this Over-the-Rhine neighborhood is still rising like a phoenix from years of neglect, you can exit the Cincinnati Bell Connector at stop #11 to grab a pint at the Rhinegeist or take a brewery and barbeque tour.

Between 12th and 14th Streets at the north and south and Elm and Race Streets on the east and west, Washington Park is an eight-acre park located in the heart of the Over-the-Rhine neighborhood.  Like much of this area, Washington Park received a face lift courtesy of the C3DC in 2012.  In addition to a gazebo that reminds me of Stars Hollow, Washington Park also features an interactive water fountain, playground, and dog park.

Related Article: Read Why Cincinnati is an Up and Coming Travel Destination

I appreciate that most folks don’t want to take time away from exploring a new place by visiting a library.  Believe me, I get it. But the Amelia Valerio Weinberg Memorial Fountain (also known as the book fountain) is pretty dang cool and it will only take you a few minutes to jump off the Cincinnati streetcar at stop #16 and walk around the block to 8th & Vine and experience the beautiful fountain in person.

Fun Fact:  The book fountain features water spilling over a stack of books symbolizing the free flow of information and ideas conveyed through the printed word.

Jackson Hole, Wyoming
Best things to do in winter (besides ski)
Read More
Do High Altitudes Make You ___?
Answers to all of your embarrassing questions
Read More
Never Taking My Kids to Disney
Read why before you judge me
Read More
BBQ Quotes
Delicious quotes to pair with your Instagram pics
Read More
Previous
Next

Cincinnati’s streetcar can get you to one of the first contemporary art institutions in the nation. Cincinnati’s Contemporary Arts Center (or CAC) works hard to feature the current paintings, sculptures, photographs, and performance art of up and coming artists. The museum’s goal is to have non-permanent exhibits that display the art of the “last five minutes.”

The CAC moved to its current location near 7th & Walnut in 2003, and you can visit the galleries at no charge thanks to funding by the Johnson Foundation, The 50, and Macy’s by taking the Cincinnati Bell Connector to stop #17 (Aronoff Center).

Surrounded by shops and restaurants, Cincinnati’s Fountain Square is bustling with activity year-round, from food trucks to salsa dancing, from outdoor concerts to an ice skating rink. The 43 foot, bronze Tyler Davidson Fountain in the center of Fountain Square was dedicated in 1871 and has “to the people of Cincinnati” inscribed on its base.

You can visit the fountain and enjoy the activities at the Fountain Square by taking Cincinnati’s streetcar to stop #18.

Intentionally located in Cincinnati, where thousands of slaves escaped to freedom once they crossed the Ohio River, the National Underground Railroad Freedom Center portrays nearly 400 years of slavery, from the first Africans brought to the “new world” in 1619 to present day.

Visit the Freedom Center, be Rosa Parks that day back in 1955 via the Rosa Parks Experience, or see a piece of the Berlin Wall by taking the Cincinnati streetcar to stop #1.

Also accessible from Cincinnati streetcar stop #1 is the Smale Riverfront Park, nestled between Paul Brown Stadium, where the Cincinnati Bengals play football, and the Great American Ball Park, where the Cincinnati Reds play baseball. It offers 32-acres of green space along the Ohio River including play areas, fountains, an arbor, and rose gardens. 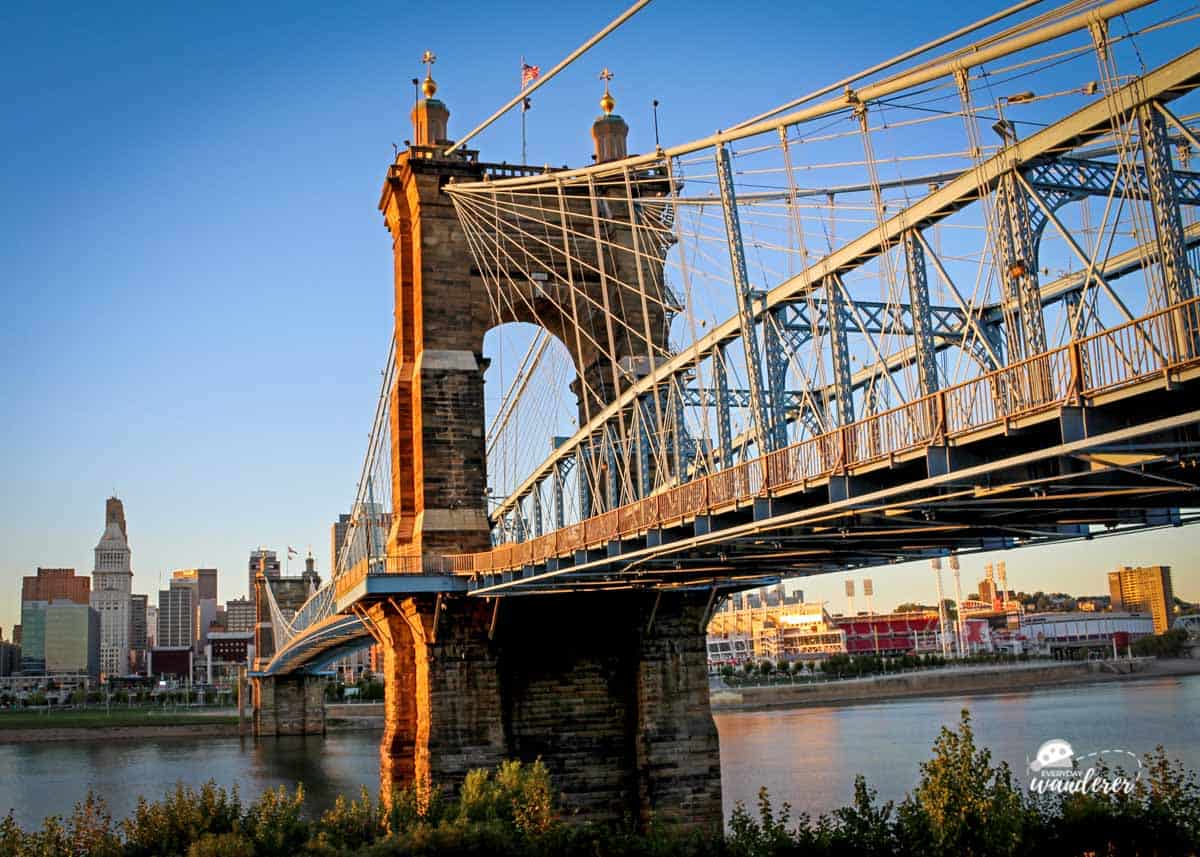 The riverfront park is bisected by the John A. Roebling Suspension Bridge that spans the Ohio River and connects Ohio to Kentucky. At a round trip of less than a half mile, it’s a beautiful, easy walk across the bridge into Kentucky.

No matter what you choose to do and see via the Cincinnati Bell Connector street car, you’re sure to experience several of Cincinnati’s more than 130 murals thanks to the talented artists of ArtWorks, a non-profit organization founded in 1996 by Cincinnati native Tamara Harkavy. Jump on and off the streetcar to explore the murals in different areas of downtown Cincinnati, or sit back and watch the murals along the 3.6-mile roundtrip loop of the streetcar.

Have You Traveled by Streetcar in Cincinnati?

What was it like? What did you do and see? Share your experiences in the comments section below! 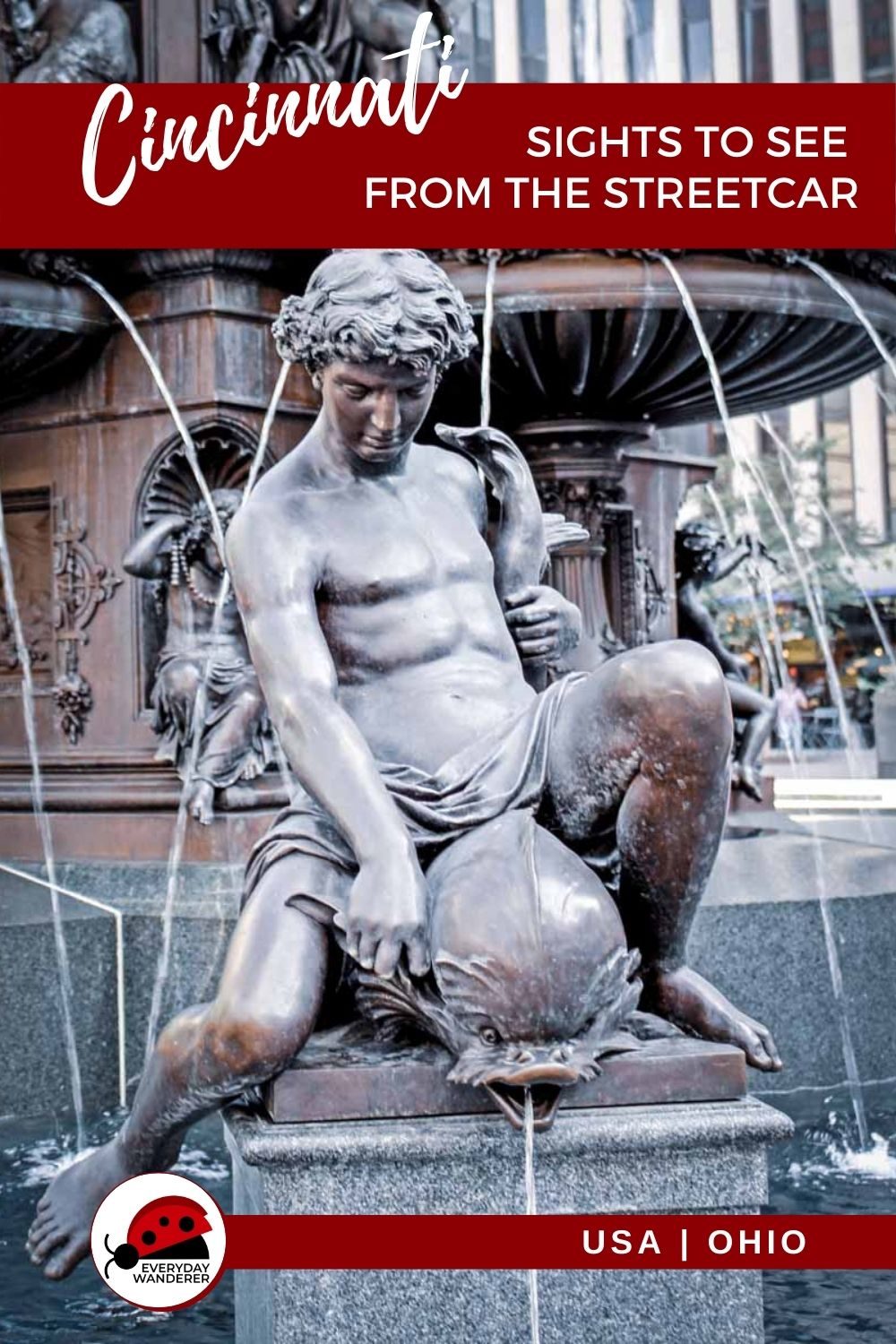 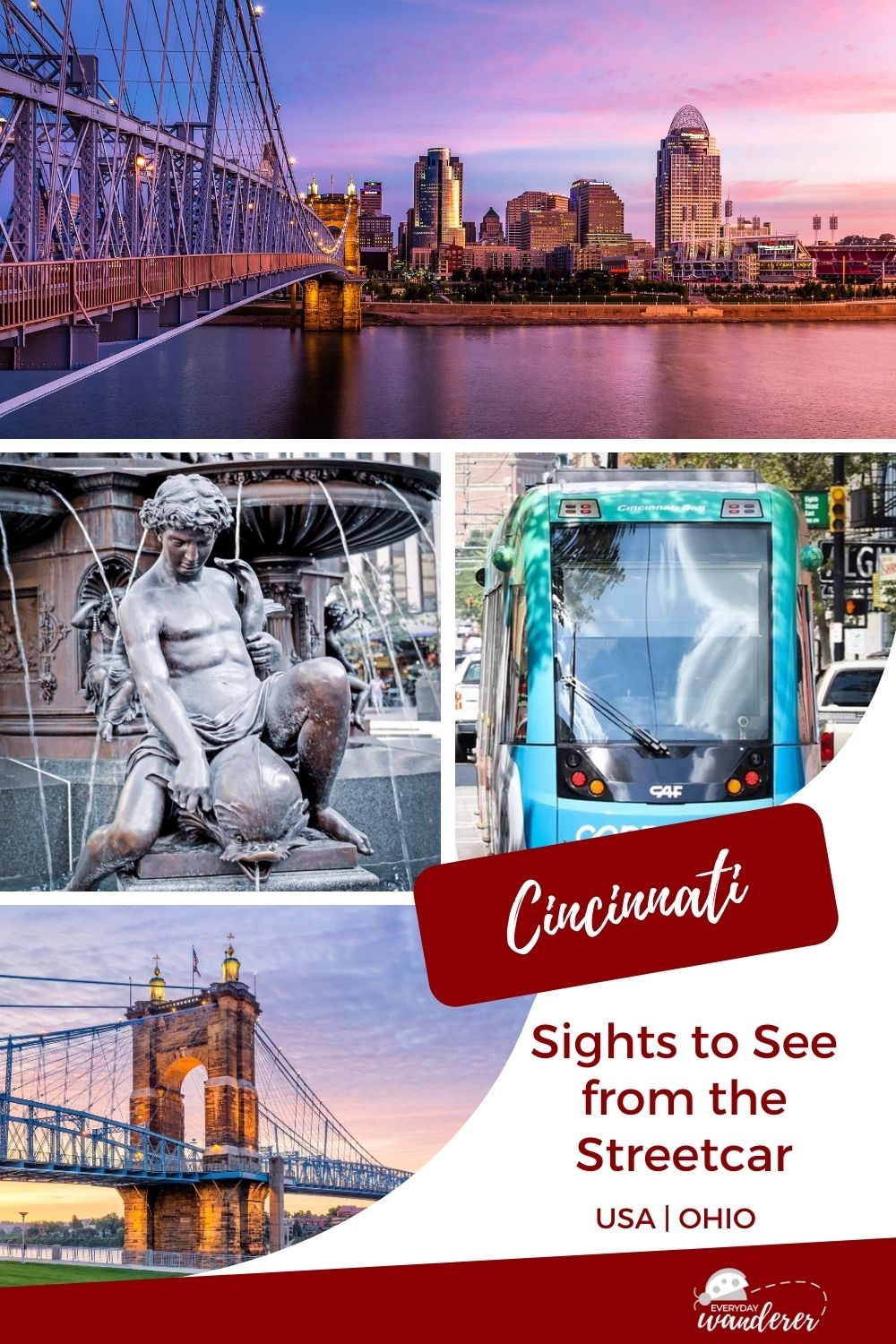 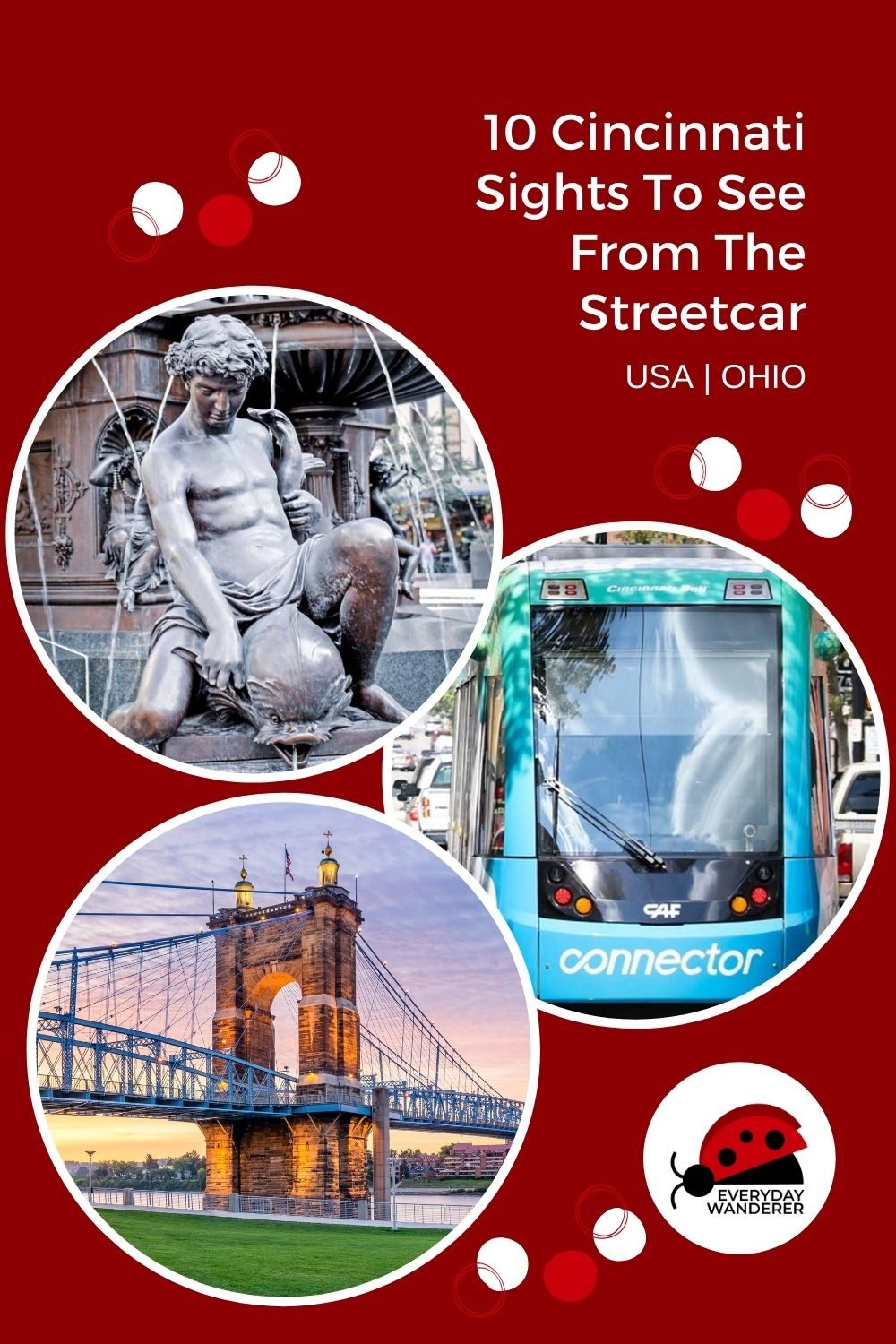 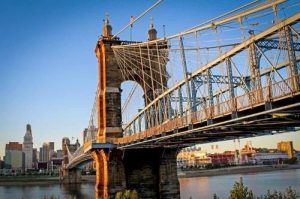 48 Hours in the Cincinnati. What to Do, See, and Eat in the Queen City. 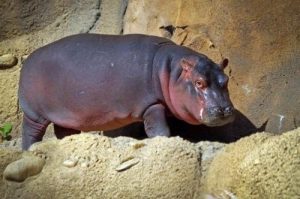 A Visit to the Cincinnati Zoo. Yes, we saw Fiona the hippo!